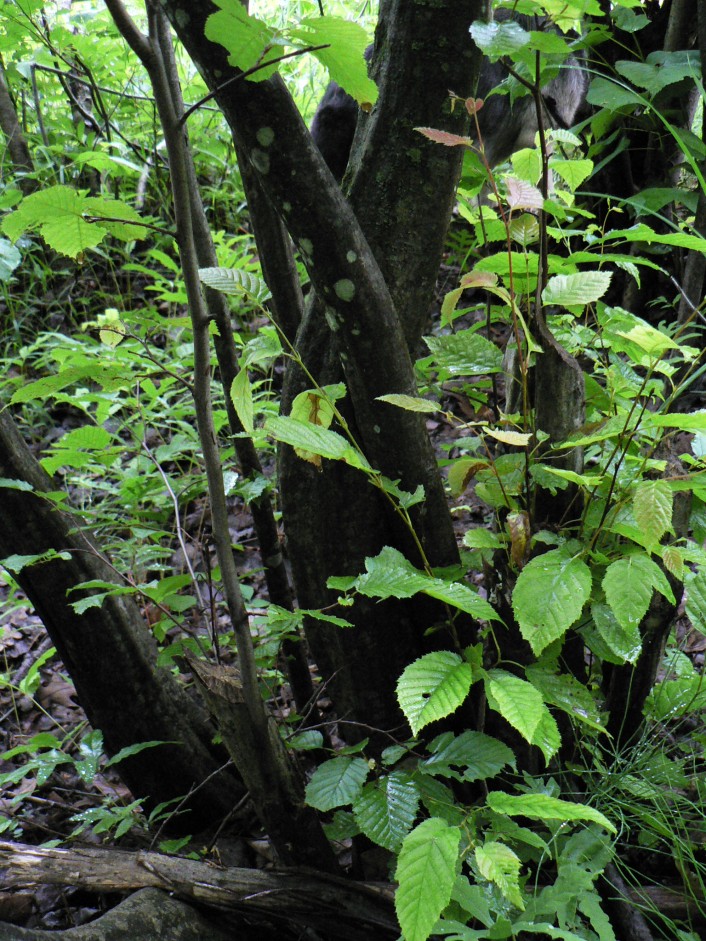 Common names for plants can be an easy way to identify them; mention trillium, and a familiar image quickly comes to mind. But sometimes the common name, or names, we give flora can create all kinds of confusion.

Such is the case with blue beech, a small tree found occasionally in the forests of our region. This unusual tree has been variously known as American hornbeam, ironwood and musclewood. All of these names describe a certain characteristic of the tree. This can, however, lead to mix-ups with other trees, making identification confusing. To add even more confusion, a tree in a completely different genus is also called hop hornbeam.

Even botanists have changed their minds on placing blue beech taxonomically. Once grouped with hazels, blue beech has now been placed in a subgroup of the birch family. Blue beech is most correctly identified by its scientific name, Carpinus caroliniana, grouping it with similar trees in the same genus in Europe and East Asia.

Whatever name it goes by, most people would walk right by blue beech without noticing it. One way to distinguish this tree is to grab its hard, smooth and sinew-like trunk. It almost feels like a muscled arm, giving rise to the name musclewood. The bark also has a vague bluish hue to it.

Blue beech is a very small tree but possesses extremely dense and hardy wood. It was so strong and difficult to break, early pioneers used it to make bowls and plates. It has also been used to make axe handles, walking sticks and golf clubs. The common name hornbeam comes from the early settlers, who likened it to the hornbeam wood they used in Europe to make yokes for teams of oxen.

The blue beech prefers shady, moist areas and can typically be found as part of the understory in some forests. It is almost always multi-stemmed, making it an attractive addition to naturalized gardens. It also readily produces suckers, creating new trees nearby. Another attractive feature of the tree is its fall colour. Its leaves turns from green to yellow to a brilliant orange in late fall.

The leaves of blue beech look similar to beech, though they are no relation to American beech (Fagus grandifolia). The leaves also resemble ironwood (Ostrya virginiana) with coarsely serrated edges. It got its common name, hop hornbeam, because its flowers resemble hops and the dense wood reminded settlers, once again, of the European hornbeam wood.

The leaves of blue beech are eaten by some moth and butterfly caterpillars, in particular the spectacular io moth. Ordinarily, this moth’s plain patterns could be overlooked, but it can suddenly flash huge owl-eye patterns hidden under its outer wings to frighten off predators.

Blue beech has separate male and female flowers (catkins) that emerge in early May. The resulting fruit (nutlet) begins to form in late May and is surrounded by bracts. These leaf-like bract clusters hang downward, creating another attractive feature to the tree. The nuts are eaten by squirrels and many species of birds. Blue beech can reach heights up to nine metres (30 feet) but typically grow to only six metres (20 feet) or less in our area. Their small stature is probably the reason most people don’t notice them among the taller, more majestic trees. But this little, unassuming tree is just as important for the overall health of our delicate ecosystem. Blue beech trees can be found on several properties managed by the Couchiching Conservancy, including the Thomas C. Agnew Nature Reserve in Washago, the Kris Starr Sanctuary near Sebright and the North Bear Alvar in Carden.