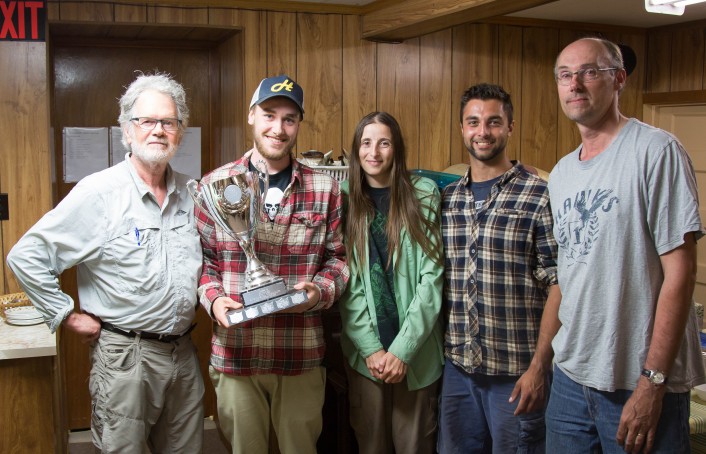 Nearly 50 local birdwatchers topped off the busy month of May by participating in the 12th annual Carden Challenge, an event that combines skills, tenacity, and friendly competition for a good cause.  The combined efforts of eleven participating teams raised over $23,000 in pledges and donations for the Carden Alvar programs of the Couchiching Conservancy.

The skills part of this event might seem self-evident; you score points for each species you identify by sight or sound, and there are around 150 species of birds that could be ticks on your scorecard.  However, only two members of your team have to confirm that identification, and for many teams, the other two or three members are there to learn.

In fact, despite the common perception of birders as “little old ladies in tennis shoes”, close to half of the Challenge participants this year were well under 40, with a few still in secondary school.  This infusion of keen young people has been an unexpected bonus of the Carden Challenge: while the older team members provide mentoring, the younger cohorts add the benefit of their sharp eyes and enviable hearing, often along with considerable skills of their own.

The structure of the Challenge encourages this breadth of participation, since teams can sign up in recreation, competitive, and biodiversity categories.  The biodiversity teams are the top of the heap, covering not just birds, but also mammals, reptiles and amphibians, butterflies and dragonflies.  The 2016 biodiversity winner, Snakes on the Plain, edged out two other teams for the win.

Bobolink on the Carden Alvar.

In the competitive birding category, a Lindsay team called the Cardenals swept to victory with 133 species.  Sadly, my traditional team, the Couch Potatoes, fell a single species behind Mark Bisset’s quartet known as the Couch Potato Chips, giving the Chips bragging rights until next year.  In the Recreation category, a team of university students known as the Bobo-heads easily led the field.

For the first time this year, the Challenge was also open to non-birders through the Walk Wylie event; although a relatively small number of participants completed the walk, their enthusiastic feedback suggests that this part of the Carden Challenge will grow in future years.

Along with having fun and growing skills, the Challenge is all about raising funds to support the habitat protection and stewardship programs of the Couchiching Conservancy.  Once again, Nathalie Rockhill and her team earned the honours as top fundraisers in 2016, bringing in over $5000 in pledges.

One of the special treats for the second year was the provision of a donated lunch for Challenge participants by Fowler Construction from Bracebridge, who brought their tail-gater trailer well-stocked with burgers and sausages, salads, desserts and very welcome cold drinks.  We greatly appreciate their adding the Carden Challenge to their roster of community events, and the volunteer participation of their staff.

So if you appreciate the diverse mix of habitats and wildlife that make up the Carden Alvar, think about joining in on the Carden Challenge next year.  We guarantee you will have fun and that you will learn something new.  And who knows, you might even get your name on a trophy!

Photo from the Carden Challenge
Use arrows to view more.