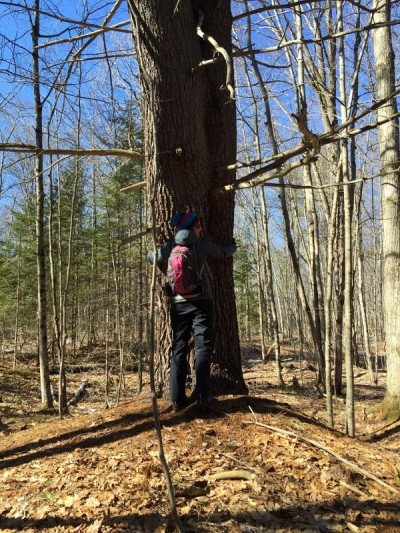 Humbleness has never been my strong suit.

But you see, sometimes bragging is for the greater good. Take for example the Couchiching Conservancy.

Let me explain. In the early spring my husband and I, along with a few friends, wandered the trail at the T.C. Agnew Nature Reserve near Washago.  An area owned, protected and maintained by the Conservancy. As we explored the landscape around us I found myself almost compulsively bragging about the Conservancy and the work it does. I was talking up the cause and explaining the far-reaching impacts, not even trying to hide my pride.

The first thing I pointed out is that all the properties they have helped protect total more than 12,000 acres, a size almost double that of Orillia. Many people are unaware of its efforts, though most enjoy the benefits of its existence.  Whether it is walking the trails in Scout Valley or putting together birdhouses at the farmers market the conservancy’s work is all around us.

Though it wasn’t always that way, it comes from humble beginnings. Starting with a few like-minded people sitting around a kitchen table, back in 1993, dreaming about a better way to protect local ecology. One of those founding members is Ron Reid, who is now the Carden Program Coordinator. Carden is another great success story, but with only 700 words I will have to leave a little of the inquiring to you. Reid remembers all the big ideas being thrown around at those early meetings. “Yes it was a big dream,” he said. “But we have gone beyond it.”

Beyond is putting it lightly.

They have 4 full-time staff, when many other conservancies have none. Then there is the opening of a permanent office at Grant’s Woods and being recognized by their peers as a leader in the conservation movement. And if that doesn’t convince you, go to their website and click on ‘Awards and Honours.’

But the big story here is how the local community embraces the ideology of the Conservancy. The generosity and environmental focus of our community is directly reflected in its success, which is why we should all feel a sense of ownership in its achievements.

One way it is supported is by those who regularly donate money. But it doesn’t stop there. People donate property to the Conservancy both for protection as well as to sell to raise funds.  Money raised helps to acquire other sensitive lands and cover the never-ending expenses in maintaining the properties already under stewardship. These maintenance costs cover everything from water testing, removal of invasive species, trail development and much more.

“The success of the conservancy

is greatly based on the tireless

work of those on the ground each

day, but the amazing generosity

focus of those donating money, land

and time keeps the dream alive.”

Money and land donations are far from the only way our community is supporting the Conservancy. It has around 300 volunteers, all people who are keen to help in any way they are needed.

Another guiding trait of the Conservancy is how it views its work. Not as a continual fight against those that would exploit the land but as a great opportunity to find paths that will try to unite all sides of any environmental issue.

As the Conservancy’s website says: “We chose a different path than the confrontational tactics often used by environmental groups, and time has proved the wisdom of those choices.” This tactic has been revolutionary in making achievements that have the potential to reach much further than our local community. Take for example Reid and the many others who created The Cornerstone Standards Council (CSC). It brought together environmentalists, community members and aggregate producers in a cooperative way, for the first time in Ontario. Its goal is to improve the environmental impact of quarries. In the end they have found a way that can be a win-win for all sides. By becoming certified through the CSC quarries stand to benefit from less red tape and less money spent on things like lawyers and consultants.

And of course, everyone benefits from the further protection of environmentally sensitive areas.

The success of the conservancy is greatly based on the tireless work of those on the ground each day, but the amazing generosity and poignant environmental focus of those donating money, land and time keeps the dream alive.

So let’s take it upon ourselves to shout from the rooftops about what its success reflects back to us and about how we are setting a standard that can inspire many, making it our responsibility to brag.

Meegan Scanlon is a volunteer with The Couchiching Conservancy and an avid outdoor enthusiast.