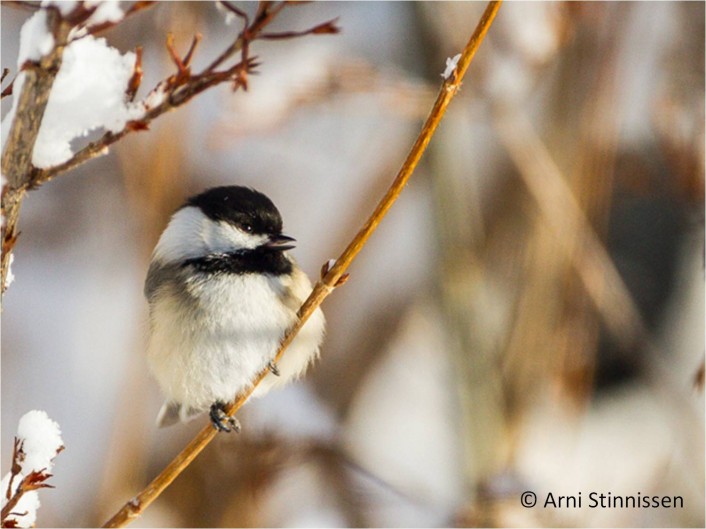 Perhaps there is no other bird which can brighten a dreary late fall or early winter’s day for more people, than this little backyard dynamo!   The chickadee!

The Black-capped chickadee, the species found in our area, has been described  variously as  sociable, industrious, agile, inquisitive, gregarious, trusting and acrobatic, and while they are all true, none of these adjectives fully describe this  little bundle of cheerfulness.

Our chickadees are relatives of European Willow Tits, singing exactly the same song. Early North American English-speaking settlers recognized the song and called it after the way it sounded, chicka…dee..dee..dee !  And the name fits it perfectly!  Can you think of a better one?

Black-capped chickadees are found across Canada, stretching as far north as James Bay and south into the mid U.S.  Two other species of Chickadee  inhabit Ontario; in the southern regions, the Carolina chickadee and to the north, the Boreal chickadee.  There are subtle differences in the three species. The Black-capped has been merited special status, as New Brunswick’s provincial bird.

Chickadees are monogamous, not a common attribute in the avian community!  They establish pair bonds in the fall, and in the spring they  search out the most suitable nest site, which is usually a small cavity in a tree.  They will assume holes, previously occupied by woodpeckers, or handmade nest boxes.   Unlike woodpeckers, they are not equipped to do much in the way of excavation but are able to enlarge small openings in a dead branch sufficiently to build a nest.  The nest is built by the female using bits of bark, mosses and some leaves.  She will lay 5-6 eggs, which are predominantly white  with small reddish-brown dots.  Incubation takes 12-13 days.  While nesting, the male frequently brings food to his mate.  When she does leave the nest, she will cover the eggs while she is away. The male plays no part in the incubation, his job is in the feeding.   The male will make 200-300 trips to the nest  each day with food over the 15-16 days the young remain in the nest.  The primary food for the young consists of insects, insect eggs and larvae which are full of rich protein required for rapid growth.  Once fledged, while they are learning to fend for themselves, the young will continue to be fed insects, with a side dish of seeds, berries and fruit.

Chickadees have been applauded for their beneficial contribution to forests and farms, consuming insect pests which make up about 90% of their summer diet.  They have got to be a farmer’s best friend!  It is not uncommon to see them hanging upside down from a branch or leaf, (made possible by having specialized leg muscles), picking up eggs and larvae and insects.

We don’t see great numbers of  chickadees in summer as they become very territorial.  A pair will raise their young in their home patch  and stick to themselves.    However, come this time of year, they begin to develop small flocks, comprised of two or three families. Together with other seed eating species,  they will search out a good winter location as home base, appropriately endowed with shelter and food.   We have cedar hedges on both sides of our property which provide great shelter and security for “our birds”.    This is very important, especially in fall and winter when numerous birds are at  our feeders.  The feeding stations become  a veritable smorgasbord for  bird eating predators, especially Cooper’s hawks  and Northern shrikes who enjoy the easy pickings of  each birdfeeder station  which  can  accommodate 75-100 individuals of various species.

Favourite fall and winter foods include black oil sunflower seeds and peanuts. They also enjoy the fat in suet.  When seeds are taken from a feeder, chickadees don’t stay there long, but dart back to a favourite branch or limb, where they will use their beak, like a hammer, to open the shell and break the meat into bite- sized pieces, then they dark back to the feeder again to repeat the performance.  When they have had their fill, they will cache food under a piece of bark of a tree, in the cracks of a deck, in the joints of a BBQ, in the car grill, or a host of other possibilities.  And they do remember where they hid them!  Researchers say they can remember the location of a cache for up to a month.

They are also attracted to water. A special treat is to watch them drinking drips off a melting icicle!

Chickadees have a very well established hierarchy when feeding.  Ranks are determined by the degree of aggression shown by each individual.  Males dominate females, females dominate juveniles.  The highest ranking individuals get the best food and get first crack at it!  This ranking is played out by various displays and postures.  Next time you are watching these little wonders at your feeder pay special attention to how they interact; the fluffing of feathers; the raising of heads; the beak openings and other threatening posture  and listen for fifteen or so different verbal calls.

During the dull and dark days of fall and winter, we are certainly blessed  to have these wonderful creatures of God’s creation in our midst!