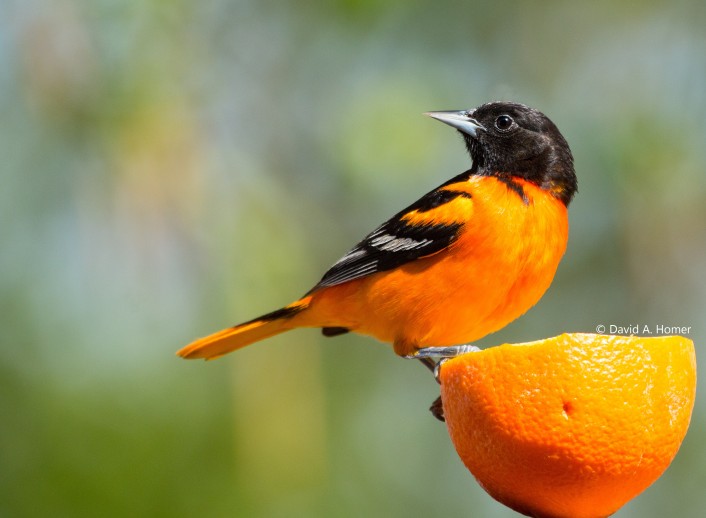 Dawn had just broken, the air was still quite cold as I looked over the still waters of the lake from our deck. The ice had only been off the lake for a couple of weeks; the trees were still void of leaves, but buds were beginning to form. Suddenly the quiet peacefulness was pierced by a very loud and clear, flute-like whistle. Then I saw it, one of the most spectacularly coloured birds we have the pleasure of hosting each spring – the brilliant orange and black colours of the Baltimore Oriole.

Early European settlers of the 17th century likened it to the Orioles found in Europe, and needing a name for this beautiful species, called it a Baltimore Oriole, named from the heraldic colours in the coat of arms of Lord Baltimore, the first governor of the province of Maryland. However, it was later determined that it was not an Oriole at all, but rather a member of the blackbird family.

Baltimore Orioles are some of the earliest returning migrants, making their presence known early in May. Males arrive first, choosing their territory and practicing their song prior to the female’s return a week or so later. With tree leaves still developing, there are few insects available, consequently, at this time, Baltimore Orioles are attracted to sugar water feeders, sliced oranges and grape jelly.

Females select their mate by their song. She will determine the very best location for the nest, which is usually built at the slender ends of long branches of primarily maple or poplar trees. The female is in charge of weaving the rather gourd-shaped looking pendulous nest consisting of plant fibre, vines and even strips of plastic, rope and twine. The finished nest is lined with softer materials such as moss and animal hair. Males don’t engage in the nest building but they will source materials and bring them to the busy knitter!

Once the nest is built and the pair get down to business, much of the wonderful singing ceases.

Three to six bluish white eggs are laid and subsequently incubated by the female only. The eggs hatch in about 12-14 days and the young are fed by both parents.

Favoured food for the young are various, protein rich insects that feed on the tree leaves. Tent Caterpillars which most birds do not find to their taste, are one of the Baltimore Orioles’ favourite foods.

As soon as the young are fledged, parents will bring them to feeding stations, where they will consume great quantities of sugar water, orange juice and jelly.

If you would like some added enjoyment in your yard between now and mid August, purchase an oriole feeder and hang it in your yard. Mix 1 part sugar to 5-6 parts water. Do not use food colouring in the water. While you are hanging the feeder, put half an orange on a stand or hang it from a hook. What wonderful entertainment a feeding station such as this can provide!

Next spring get those sugar/water feeders and oranges out in late April. At the same time, cut 5-6 inch long pieces of coloured yarn and hang them from the feeders or nearby. The yarn will disappear, to be found tightly knitted in a hanging Baltimore Oriole nest which will still be there long after the birds are in the South and our naked trees reveal all of those coloured pieces of yarn in vacated nests over the winter!