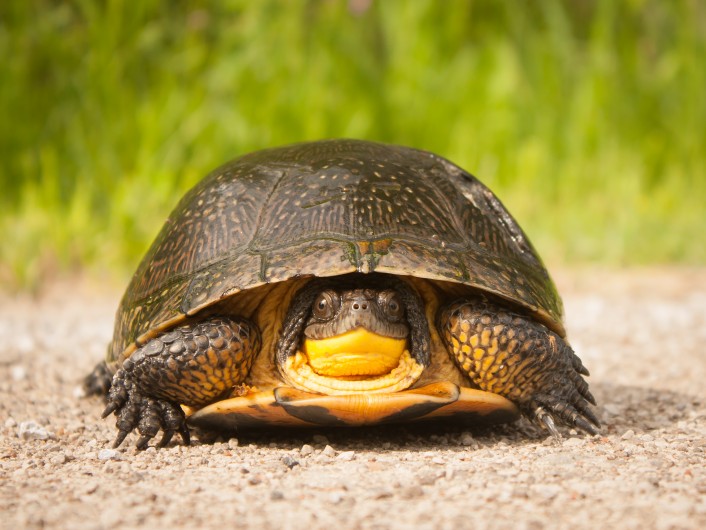 Alvar environments boast ecological communities that are incredibly rare and worth protecting for future generations. Regionally, the globally-significant Carden limestone plain is an area of large, diverse, and relatively un-fragmented habitat including alvars, shrublands, grasslands, forests, and wetlands. Due to the vastness of the Carden landscape, it is home to several species at risk that are dependent on connected habitats. There are driving forces spearheaded by The Couchiching Conservancy (CC) that protects these lands continually from habitat fragmentation.

Habitat fragmentation, as stated by Ontario Nature, occurs when immense development pressures threaten the survival of a species, such as major roadways. These features and threats from human influence fracture fragile habitats, like wetlands, of species such as the Blanding’s turtle which is currently listed as ‘threatened’ in Ontario.

Keeping natural lands connected on the Carden Plain means leading and partaking in active stewardship activities. In the context of conservation, stewardship is the planning and management of natural resources which benefits a given an ecological unit of land. Ensuring ecological connectivity is vital to the preservation of species at risk habitat. Special attention to parcels of land in the region such as Carden Alvar Provincial Park and Wolf Run Alvar is needed to ensure these landscapes stay intact. Lands managed by CC staff and volunteers are being continually maintained and monitored to decrease the possibility for habitat fragmentation.

Each year, the Conservancy helps to eliminate habitat fragmentation on the Carden Plain. One critical and emerging threat to critical habitat includes invasive species. Invasive species are plants and animals that are not native to a unique area, and spread, displacing native, or original populations of species. Sometimes this change can be interpreted as negative, or positive. But with respect to the Carden Plain, they are often seen as negative.

“Each year, the Conservancy
helps to eliminate
habitat fragmentation
on the Carden Plain.
One critical and emerging threat to
critical habitat includes
invasive species.”

Species such as dog strangling vine (DSV) are moving in from the south, isolating patches of vegetation, degrading their potential for good habitat quality. For example, bird habitat quality may be lessened as native trees and shrubs become eradicated from the effects of DSV. According to Ontario’s Invading Species Awareness Program, DSV, native to Eurasia, was introduced to the United States in the mid-1800s for gardening. The plant is highly tolerant of variable growing conditions, and can produce up to 28,000 seeds per square metre. This goes to show how significant one human action can make on the health of wildlife habitat for the future.

The Couchiching Conservancy, along with partner organizations such as the Nature Conservancy of Canada (NCC) are involved in invasive species control initiatives on the Carden Plain. Each summer NCC and CC, with the help of an army of volunteers, tackle the existing populations of DSV threatening the valuable habitat of Carden.

Another key approach the Couchiching Conservancy takes to maintaining good habitat quality, in particular for species at risk (SAR), is by taking a multi-stakeholder approach to the management of natural lands. The Integrated Carden Conservation Strategy (ICCS) was assembled in 2008 to raise the effectiveness of current and future conservation initiatives on the Carden Plain. One aspect of the strategy is to reduce any existing friction between members or landowners of the local Carden community, conservation groups, farmers and companies operating pits and quarries. Ultimately, it is stressed that by respecting the rights of all landowners, conservation, and thus habitat connectivity can be achieved for the long term. Overall, the ICCS works to eliminate resource management conflicts at a local scale.

To join The Couchiching Conservancy in an effort to protect vital plant and animal habitat, click here to enlist as a volunteer.

There are several events throughout the year that help contribute to preserving the Carden Plain, and other key areas in the Couchiching-Severn region.