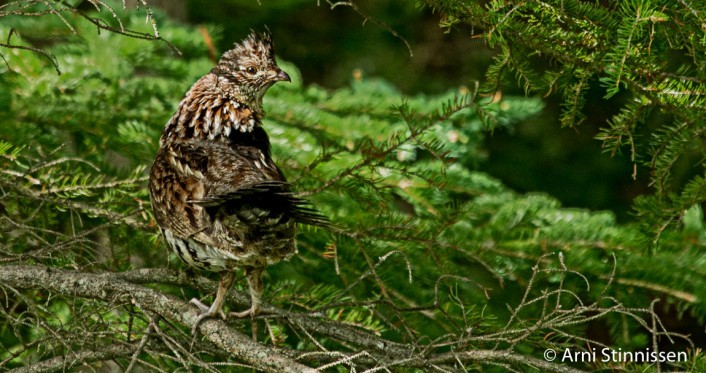 The Ruffed Grouse are well known for the drum sound they make, but do you also know about their social habits?

It was still quite dark when I awoke, and as usual, I lingered in bed until first light. My morning ritual takes me from bed to a large picture window which overlooks our back yard and the lake beyond, on one side of the point of land we call home. Once surveyed, and following a good stretch, I normally head down the hall to continue with my morning rituals.

On this morning, the grass was covered by a sea of leaves, the result of heavy rain and wind during the night.

What I saw only happens once a year, and in the fall – it is something one can depend on. From out of the cedars on our south property line, across the property and into the cedars on the north side, he struts. Those not familiar with wild birds in our area would think it a small chicken, but no, this “strutter” was a juvenile Ruffed Grouse.

In the fall, young male birds will forsake the family brood to establish a territory of its own. This young fellow would not find a suitable location on our point as it is far too populated, and lacks sufficient resources of food. He will have to turn around and go back to the forest where he was raised. Ruffed Grouse live in mixed hardwood and conifer forests where they can find refuge in the trees and enjoy the seeds of trees such as aspen and birch, as well as the numerous fruits of shrubs and bushes.

The male doesn’t beat his chest, ape like, nor does he beat the log.
The drumming sound is the result of air rushing in
to fill a vacuum created inside the wing as it beats.

They are best known as the birds which beat their wings and make a drumming sound in the forest. Male birds will drum all year round, but do so far more in the spring of the year to announce their availability to nearby females. They normally will stand erect on a downed log or a large rock, tail spread into a fan shape and the feathers on their neck ruffed out, hence their name. The male doesn’t beat his chest, ape like, nor does he beat the log. The drumming sound is the result of air rushing in to fill a vacuum created inside the wing as it beats.

When his job of fertilizing as many females as he can is completed, he will strike off on his own and leave the females to rear the offspring. Females will lay 7-15 buff coloured eggs which she will incubate for about 25 days. Amazingly, the precocial chicks will begin to fly in five days.

Ruffed Grouse are normally quite solitary, but in the winter groups of 8-15 will form. One late winter’s day we were walking a trail close by our home, we climbed up over a knoll and from in front of us, three grouse took flight to a nearby birch tree where they joined 11 other birds which were foraging for buds.

Ruffed grouse keep warm in winter by taking roost in conifer trees and when it is really cold, they will bury themselves in deep snow. Feathers on their feet and toes also keep them warm and aids them in walking on the snow.

I didn’t see our visitor again that day. He likely found out quite quickly that this wasn’t the best spot to take up residence. At least that is what I hope happened, because quite often young birds such as this one engage in what biologists refer to as “crazy flight”, an erratic flight behaviour which frequently ends their young life when they crash into the sides of houses and cars and sometimes even a tree.

Are you ready to delve into the world of birding? Take a look at the Simcoe Nature Board where you can find recent sightings from the area.