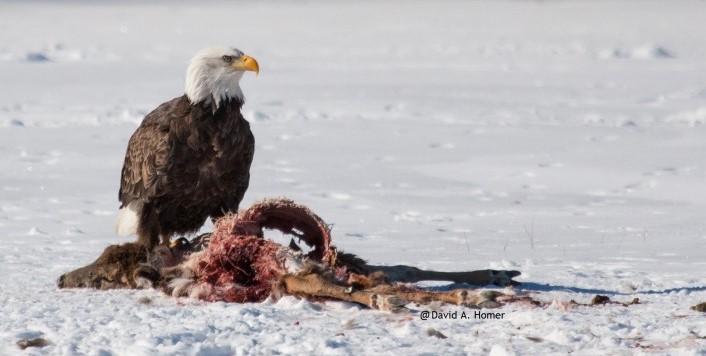 November and December are usually quite dreary, dark and damp months and can be a lean time for bird watchers. Feeders see little action until the northern birds, the Siskin’s, Redpolls, Grosbeaks and Finches migrate into our area.

For those who love and study nature however, every season brings its surprises and joys!

As the ice begins to form on lakes in this area, if we watch closely, we can expect to see Bald eagles fishing at the edges of the forming ice or sitting in the higher elevation of shoreline trees. The majority of Bald eagles nesting in Ontario do so much farther north. When the lakes freeze, they venture south where there are still open waters. It is quite common to see them from now until our lakes are frozen around the narrows in Orillia, and a little to the East, the river in Coboconk and nearby lakes.

Bald eagles will migrate just as far south as they have to in order to find open water for fishing- fish normally comprise the bulk of their diet; they may also take ducks and other birds. Some may stay in areas even without open water and depend on finding other food, such as carrion, especially deer and other animals hit by cars or the remnants of wolf or coyote kills.

Bald eagles in Ontario were designated as Endangered until just a few years ago. During the mid 1900’s the species declined sharply due to habitat loss and deadly chemical contamination of their food. With the banning of DDT, the species has made a remarkable comeback! Numerous pairs are now nesting in Southern Ontario along the Lake Erie coastline, along the Bruce Peninsula, Manitoulin Island, and Eastern Ontario. There are scattered nesting locations throughout South Central Ontario-one confirmed nest within a few miles of downtown Orillia. We can expect to find even more in the coming years.

Bald eagles in Ontario were designated as Endangered until just a few years ago. With the banning of DDT, the species has made a remarkable comeback!

Large nests made primarily of sticks are located near the top of high trees. Bald eagles have great nest fidelity and the adults will add building materials every year as needed. One to three white eggs are laid and incubated by both parents for 35-36 days. Both parents hunt and bring food to the nest, where they tear the prey into bite- sized pieces. Young will fledge in about 12 weeks.

It is not until the young are 4-5 years old that they gain their characteristic white head and tail. During their juvenile years, they are mostly brown gaining variable white feathers as they age. They will not breed until they are 4-5 and tend to keep their mate for life.

When time permits during this busy time of year, dress warmly and get outside with your binoculars and track down one of the most majestic birds to grace our landscape, truly a sight to behold, the Bald Eagle.

Habitat protection is a critical component of sustaining species such as Bald Eagles. Help us to protect these irreplaceable wild places by Protecting an Acre. It’s a great gift for the holiday season for $25 and we can send a card on your behalf.

Visit Canada Helps to give the gift of nature.