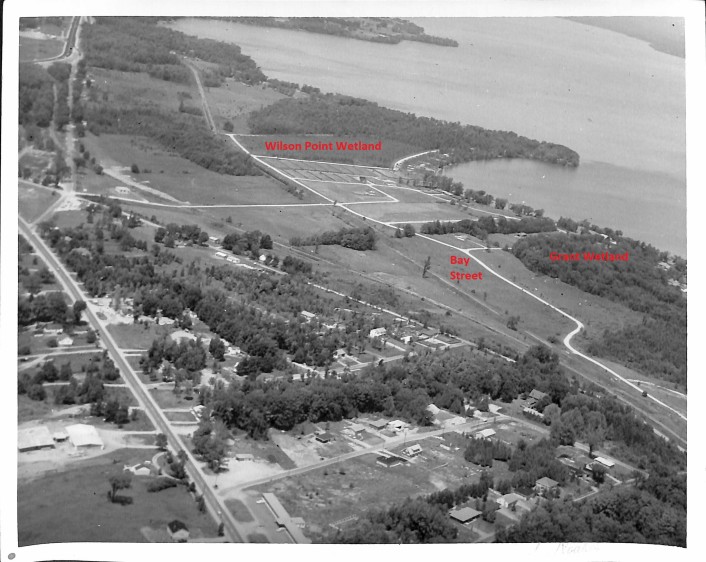 Our water monitoring project is growing and moving into town this year.  Every time we add a new site we learn so much we wish we had done it sooner.   We console ourselves with the adage:  The best time to plant a tree was 20 years ago.  The second best time is today.

One of the properties that we’re adding is Grant Wetland, which was donated to the Conservancy in 1996 and has two waterways flowing through it.  We’re looking forward to hosting students and science teachers from Patrick Fogarty Secondary School starting this September  who will study the site as part of their Chemistry program.  And what an interesting site it is…

On our first visit, interns Meagan Coughlin, Aiesha Aggarwal and I witnessed a pair of Downy Woodpeckers mating in the sky above us and a mangy red fox trying to get past us and into the wetland.

As interesting as that was, the real surprise came when we got back to the office with some video footage Aiesha captured in the cold water creek.  After careful study, our Stewardship Manager Dave Hawke concluded that it was a Trout Perch:  a unique and ancient species dating back 55 million years which is the link between Trout and Perch before they split into two species.

The Trout Perch is rarely seen because it only inhabits streams at night, where they dine on nutrients unavailable in lakes.  They swim for the lake in the daytime, transferring these delicacies to the Trout, Pike, Perch, and Walleye who eat them.   The Trout Perch we saw was in the wrong place at the wrong time.

We also ran into a young fisherman from Tallwood Drive, who said he fishes the creek for Brook Trout.  Not what we were expecting in this urban, fragmented wetland!

“the real surprise came when

we got back to the office

with some video footage…

Dave Hawke concluded that it

was a Trout Perch:  a unique and

55 million years which is the link

between Trout and Perch”

There are two main tributaries flowing through Grant Wetland.  One we’ve named “Bay Street Drainage” which tends to be nutrient-rich and very turbid and makes its way from the Northwest corner of Grant Wetland to the Southeast corner.  The water in this tributary is warm, low in oxygen, and high in Nitrates.

This contrasts with Fittons Creek, which originates from several springs coming out of the hillside near Fittons Road.  These springs deliver cold clear water which flows through Grant Wetland along the south end to merge with the Bay Street Drainage before entering Lake Couchiching.  Fittons Creek is very high in dissolved oxygen, low in nitrates, and high in alkalinity, meaning it is capable of supporting a wide variety of aquatic life.

A booklet produced by the Orillia Water Light and Power Commission in the 1970’s outlines how important these springs were to the growth of the town.

After lengthy negotiation and litigation, Orillia Town Council expropriated the property containing the springs from Mr. H. W. Fittons in 1892.  An eight inch cast iron pipe was then laid between the springs and the bottom of Jarvis Street, and the Waterworks Filtration plant was built (still standing today beside Couchiching Park).  The steam power generated from these springs produced enough power to run 45 street lights and 2,300 lamps for public and private use.   The Jarvis Street plant served the town until 1911.

The aerial photo above is from the 1960’s and gives you some idea of how the wetland has changed over the years.  Despite all of the human pressure on it, Grant Wetland survives, and is important to people and animals alike living in the area.   Fittons Creek is one of the most significant features of the property.  We will have permanent water monitoring teams at the site beginning in July.

Many thanks to staff and volunteers at the Orillia Public Library’s Local History Room, for the photo and for information on Fittons Creek.

If you would like to volunteer for the Conservancy’s water monitoring project, please contact Dorthea dorthea@couchconservancy.ca or (705) 326-1620.