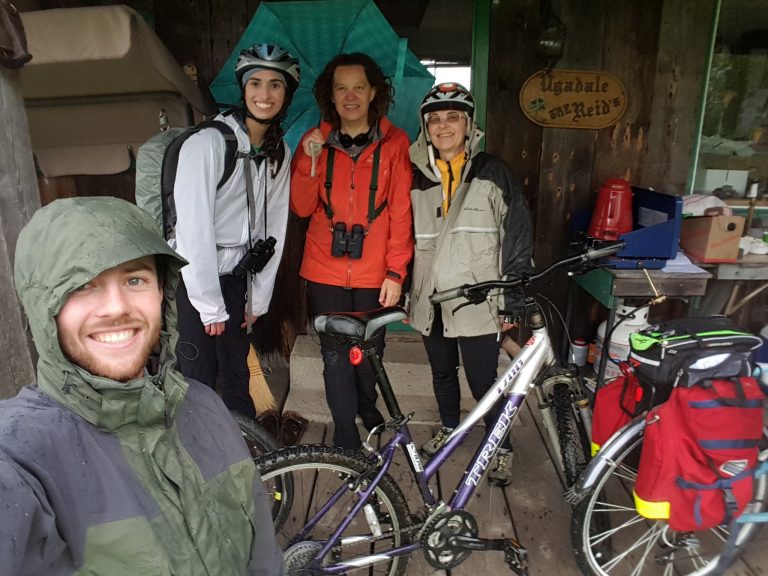 Just imagine the opportunity to embark on an environmental expedition that immerses you in the depths of wilderness, where you get to learn, explore, and engage with nature alongside like-minded people. A whirlwind “safari,” if you will, for 24 hours observing species at risk, breathing in fresh air, and taking immediate conservation action all while having fun.

Sometimes there isn’t a need to travel thousands of kilometres from home to have these kinds of experiences. With an increased need to spread awareness on the effects of climate change on species habitat what a better time to join forces with nature at the local level.

Annually, the Couchiching Conservancy welcomes participants of all skill levels to partake in the Carden Challenge. Thanks to the generosity of supporters far and wide, in May 2017 this renowned biodiversity and birding marathon raised over $19,000 for environmental conservation on the Carden Alvar, east of Orillia. This mosaic of globally-rare habitat is home to some of the Province of Ontario’s species at risk (SAR) and is an important area to sustain for the long term.

“This renowned biodiversity and birding marathon raised over $19,000…”

This year I took to the backroads of Carden as a member of team “Pedalling for Nature” where we set off on a mission to observe as many bird species as possible (in the recreational birding category). Riding bicycles as our mode of transport, we became well acquainted with the rain-filled potholes of Wylie and Alvar roads. There is something to be said about doing the challenge by bicycle because you are continually exposed to the natural environment throughout the entire competition. There are no car doors to open and shut and the opportunities for viewing and listening to the wildlife around you are [mostly] constant.

One of our first close encounters was when an American bittern flew right between our team as we stood patiently on the roadside listening for grassland birds. Our attention immediately turned away from the soothing melodies of bobolinks and eastern meadowlarks towards the graceful incoming of this member of the heron family. There have been years previous that it has seemed impossible observe the American bittern so we were off to a great start indeed.

As the sun set on the horizon of the alvar some really unique species began to let us know of their presence. Two common nighthawks, nocturnal insect hunters, were both seen and heard within 30 metres of our team. These fascinating birds descend vertically in the sky to defend their territory during breeding season. As a result of this act their wings generate a distinct “booming” sound. It’s one of many forms of entertainment that nature allowed us to observe while biking the Challenge.

The adventure continued to excite team “Pedalling for Nature” as a whole including hearing a pack of coyotes, or perhaps coywolves, as we pedalled through the night. The eastern whip-poor-will was another species that fuelled our adrenaline as we rolled along the roads of the alvar. Hearing and seeing these wild creatures were just one more way that the experience connected us directly to nature.

Pedalling the route really awakens one’s self to the realities of the natural world. Moving at a good pace down Alvar Rd. at nighttime was one of my favourite experiences of the Carden Challenge. With a good headlamp and an enthusiastic and ambitious team I found spotting or hearing species to be both fun and rewarding. This was also true for during our daytime pedalling. Our list of observed species grew until we reached a total of 95 for the 24 hour period. Our team was full of energy and it continued until we reached the 60 kilometre mark of our journey. Overall 150 species of bird were counted by 8 birding teams, and 3 biodiversity teams found several new species including Eastern Redbacked Salamander,  Ebony Boghaunter, a species of dragonfly new to Carden, and a five lined skink!

So next May if you’re feeling adventurous and eager to learn, gather your colleagues, friends, or join the Carden Challenge as an individual.  You’ll thank yourself you chose to embark on the Challenge, and nature will certainly thank you! The Carden Challenge is an amazing way to partake in a local grassroots initiative to conserve the important habitats of the Carden Alvar.

To learn more about this years Carden Challenge Click Here!

Cameron Curran is a biologist and volunteer with The Couchiching Conservancy, a non-profit land trust dedicated to protecting nature for future generations. To date, we have helped to protect over 12,000 acres of land.