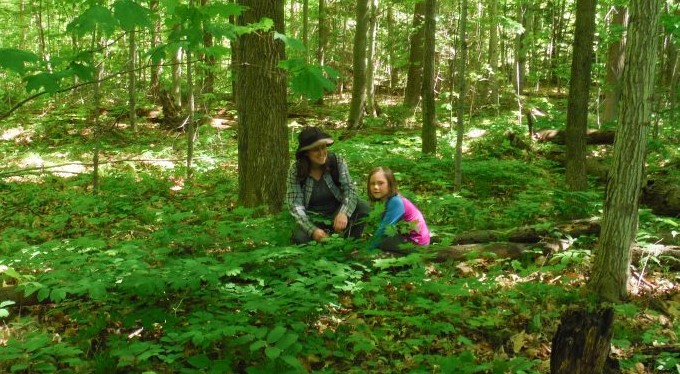 Kim Trudeau and family discovered the Couchiching Conservancy through time spent at Church Woods.  This winter and spring Kim took our Species at Risk, Invasive Species, and Vernal Pool workshops.  Now she and her family are putting her new knowledge to work monitoring the Vernal Pools and salamanders of Church Woods.

To see more photos of our field visits to Church Woods and other Nature Reserves this spring, including the cutest photo of a raccoon you’ve ever seen, click here.

We don’t often write about McDarker Wetland because its boggy conditions make it difficult to visit.

The 20 hectare property was purchased in 1999 with funds provided by Amy and Dave Darker, and it supports many rare plants.

Four field staff ventured in to the wetland on June 11th, to look for some of those rare plants.  They found Royal Fern, Water Avens, Naked Miterwort, Nodding Trillium, and Yellow Ladyslipper.

Naked Miterwort is a delicate plant that loves damp soil, wetlands, and hardwood swamps.  It can be found in Ontario and Quebec, and as far south as Georgia.  It is a listed Species at Risk in Michigan.

The team also saw and heard Warbling Vireo, Rose-breasted Grosbeak, a Broad-Winged Hawk soared overhead, and there was evidence of Moose.

…and lots of mosquitoes, *sigh*.

Thanks to Peter Mills who helped us identify this mass of Spotted salamander embryos.  They were discovered in a Vernal Pool at the Adams Nature Reserve and photographed with a smartphone in a Waterproof case.  Our salamander monitoring team of Joelle Burnie and Courtney Thompson will be keeping a close eye on them, as well as the boards we have placed on the property to attract salamanders.

Click here to see more photos from the field

We caught this Baskettail dragonfly entering a new stage of life on a trip to Wolf Run Alvar –  leaving behind it’s aquatic larval stage, and with it the exoskeleton, for a life of flight.  Dragonflies were some of the first winged insects to evolve over 300 million years ago.

We were visiting Wolf Run Alvar with Tom Wilson, Toby Rowland, Dorthea, and the new Reptile Monitoring Team made up of Kim Ariss and Katrina Hunt.  We didn’t see any reptiles, but the birding was pretty good:  A species list of 32 including Scarlet Tanager (which seem to be everywhere this year), six Rose-breasted grosbeak (which also seem to be everywhere this year),  Sandhill crane, Magnolia, Nashville, and Chestnut-sided warblers, and Eastern towhee.   Have you also been seeing a lot of Brown thrashers lately?

Check back soon to see more photos of our trips to the field this spring (the flickr site is down at the moment).  The blackflies are out in earnest, by the way.

Pam MacLachlan and Mary Juneau are back in the field for their second year at one of our Salamander Monitoring sites.

The temperatures were just right for basking turtles, and we also saw an Eastern red-backed salamander under a rock on a slab of granite.

Ian and Chris ventured to the Ron Reid Nature Reserve and paddled along the Black River up to Ragged Rapids.

They reported that the water levels are perfect with a decent current but really no problem going upstream. The road is pretty good as well. Black flies were out but not biting yet.

They report that the Red Trilliums are blooming in Grant’s Woods,  and the White should be blooming shortly.   – May 15th

Kaye Zoller and Kaila Cramer are new to the Conservancy this year and will be doing frog call monitoring at one of our Easements in Carden.  May 14th was the perfect evening to start:  Moonlight, mist over the marsh, and a temperature hovering around 7 degrees Celsius.

This is Katrina Hunt and Kim Ariss, one of the fabulous teams we have stewarding the Adams Nature Reserve.   This past Sunday May 5th all the Adams monitoring teams gathered for a hands-on citizen science demo for our good friends and fellow Land Trust partners from The Nature Trust of New Brunswick and The Bruce Trail Conservancy.    Noella Storry, Meagan Coughlin, Joelle Burnie, Holly Brown, and Eileen Atkinson also came out to explain the work they do to monitor the Adams Nature Reserve.    All the teams represented the Couchiching Conservancy well and made us proud!

This event was part of a week-long exchange between our three Land Trusts, to learn about each other’s stewardship programs and grow stronger.   It was a rich experience and we left with our heads swimming full of new ideas.

See a photo album of the week-long event here

On Sunday May 5th Courtney saw a Midland Painted Turtle on a road in Carden. She decided to help it cross.  She drove on and found a safe place to turn around. In the minute it took her to find a driveway, and come back to the little reptile, it had been hit. Part of its shell was broken right off.

“I was happy when I turned the car around, I could see that there was already a truck there to help it. I thought I may not have to stop, but when I got up to the truck – which my friends were in (Joelle Burnie and Cheyanne and Bethany from the Nature Trust New Brunswick) I could see that they were holding an injured turtle.”

The group decided that Courtney would take the turtle to the Kawartha Turtle Trauma Centre in Peterborough.

“After a long drive I got the Turtle to the centre. I could hear it moving around in the cooler I had it in, so I knew it was a fighter but I was relieved to pass him/her into more experienced hands. They hooked it up to a small IV, and asked if I would like to join them when they release the turtle. – I can’t wait for the release date!”

“The centre is small, and crowded, and full.  There are so many turtles that need our help. The centre told me that turtles can recover from very severe injuries, and that even if a mother turtle may not make it, they may still be able to harvest and hatch the eggs. It is always worth getting them to the centre, and recording where you picked them up from.”   https://ontarioturtle.ca/

Frog monitoring teams are now in the field at 11 Couchiching Conservancy Nature Reserves.  We are also assisting Copeland Forest Friends by collecting frog Monitoring data at the Ducks Unlimited Pond and the wetland crossing the Line 3 trail.

On a balmy April 25th evening, Fred and Jane took their first monitoring visit of the season, and heard Northern Leopard Frogs, Wood Frogs, and Spring Peepers. These three frog species are typically the first to be heard in our area, and the males start their mating calls once the evening temperature reaches approximately 7 degrees Celsius.  Fred and Jane also noted leeches in water flowing across line 3.

Over 30 volunteers pitched in on Earth Day and  picked up 50 bags of garbage at Wilson Point Wetland and the surrounding neighbourhood.

In a span of only two hours, these dedicated people picked up 50 bags of garbage, household items and waste. Wilson Point Wetland is a nine-hectare Nature Reserve near Lake Couchiching in Orillia that was protected in 1996 thanks to Charles Grant and his sisters Sandra and Kerry.

The property is a good example of wooded swamp with mixed coniferous and deciduous species. Nature Reserves like this act as a critical filtration system. The care of this property is made possible thanks to members, supporters and volunteers.

“We are so grateful for the people who step up to protect the Earth, on this day, and every of the year. It was disappointing to see how much garbage we collected in a relatively small area of Orillia,” said Joelle Burnie, Engagement Organizer with the Conservancy.

Our Frog Monitoring Team at Bluebird Ranch reports that the Western Chorus Frogs were calling on April 17th! The Spring Peepers and Wood Frogs will not be far behind.  Western Chorus Frogs are listed as a “Threatened” species Federally, but in our region we find they are fairly abundant in Ramara and Carden.

Our Bluebird Ranch team of John F. Wright and Morris Ilyniak also sent in photos of the Barn Swallow structure:  apparently the woodpeckers have discovered it!

Barn Swallows are listed Federally and Provincially as  “Threatened”.  As wooden barns go, so go the Barn Swallows.  Ron Reid built this structure several years ago and it has been successfully occupied by nesting Barn Swallows.

While we wait for the snow and ice to melt, training courses for the citizen science program continue through April and May.  On April 3rd,  seven volunteers joined Dave Hawke to learn the basics of operating a GPS handheld device.

Knowing how to track your route and identify the location of significant wildlife sightings is an essential tool for all of our monitoring activities.

Click here to see what training courses are coming up next