This weekend! Birding, biodiversity, binoculars…these all come together in the 15th annual Carden Challenge, an event in support of our conservation efforts of the Carden Alvar.

The goal of the Carden Challenge is simple:

Raise funds to support the stewardship of Carden’s alvar and habitats by counting as many species as possible during a 24-hour period.

Fowler Construction will once again be providing lunch for participants at the Cabin on Wylie Road!

The Challenge finishes off with a well-deserved dinner, care of the Lake Dalrymple church ladies. Not to be missed – they make the best pies!

What is an Alvar?

In an area east of Orillia and northwest of Lindsay, a flat limestone landscape called the Carden Plain harbours rare habitats known as alvars. Alvars occur only on limestone bedrock with little or no soil, where spring floods and summer droughts create harsh conditions. Many of the wildflowers, native grasses and invertebrate species found on alvars normally occur in the western provinces, and many are rare. These habitats are globally imperiled, occurring only in the south of Sweden and scattered around the Great Lakes Basin. Carden Township’s alvars are thought to be among the richest in the province, with a great diversity of alvar species.

Highlights of the 2018 Carden Challenge

Justin is Quest Nature Tours’ Director of Programs and senior naturalist. Born and raised in Canada to an East Indian mother and Czech father, and schooled in French Immersion, Justin became by proxy a student of languages and cultures from an early age. A keen interest in nature also came to him early, and so one might say that travel came “naturally” to him as well when he was whisked off to visit relatives in faraway places! Driven by a desire to share his observations with others and an aptitude – so he was led to believe – to help others develop their own interests, he began leading nature walks in his early teen years and was ultimately able to make a career that married his multiple passions. He worked for several years as Senior Naturalist at Ontario’s world-renowned Algonquin Park, where he coordinated the park’s interpretive program and recruited and mentored promising young naturalists, in addition to serving as Lead Howler for Algonquin’s celebrate Public Wolf Howls.

“I grew up below a limestone escarpment in suburban Ottawa, and I spent much time exploring the area along and atop the escarpment, which contained remnants of habitat from pre-development times. On my first visit to the Carden Alvar (to participate in the prescribed burn at Cameron Ranch in 2012), I was struck by the similarities of the vegetation to my home turf, which shared the same limestone bedrock from Ordovician times. I fancied that the Carden Alvar must represent a primeval picture of my ‘home habitat’ prior to creeping residential development. Since my first visit, I’ve made at least one annual pilgrimage to the Carden Alvar to rekindle my connection to ‘Old Ontario’. It is reassuring that we have this place and I hope it is here for the enjoyment of all in perpetuity!”

Protecting sensitive habitat for birds is an important task, especially as the changing climate is affecting bird populations around the globe. The Carden Alvar provides habitat for several at-risk bird species and protecting it absolutely necessary. The Muskoka Merlins are happy to support the Couchiching Conservancy for the Carden Challenge.

The Muskoka Merlins are a group of Muskoka birders who understand the importance of protecting bird habitats in the years to come. We’ve entered the competitive birding category and are looking to see over 100 species of birds over the 24 hours.

Carden Alvar has an amazing diversity of species, so we will have to use our Raven-like cleverness to document as many as we can.  We’ll be up at 5 a.m. to catch the earliest birds, survive on a steady diet of junk food, and by late afternoon our conversation may just descend into the assorted squacks and grunts of true Ravens.  But your support, in the form of your donations, will carry us to new heights in our quest for every critter out there.

Tanya Clark, Meagan Coughlin, Philip Careless and Joelle Burnie have banded together again this year. Last year they won the Teeter Ass Trophy for team spirit (they studied for the Challenge!) – can they pull a win this year in the Recreational category? Please sponsor this team to help them in their efforts!

Will they get to 100 species this year? We know they will try their hardest! Please sponsor this team to help them get loonie on the Carden Alvar.

Courtney Baker, Stevie Baker, Stella Minges and Sophie Barnes (Stella-5  and Sophie-8 are our youngest participants, and they have already been studying so watch out!)

The Fantastic Fledglings are aiming to make a new personal best at the 24hr birding and fundraising event, the Carden Challenge.  We’ve been taking part in this event for several years now and are looking to not only up our record of viewed bird species in 24hrs, but raise money for the Couchiching Conservancy while doing so.

This is an amazing part of our ever shrinking natural world, providing habitat to 250 bird species among the rest of the plant and animal world.  If you can’t see it for yourself, see it through us, we will share some of our pics of the challenge at it’s conclusion.  Pretty well every where you look, at any time of day, you will see or hear amazing birds you’ve never seen or heard of before.  From the multitudes of warblers and sparrows hopping from branch to branch to the giant raptors hanging in the sky, this is an abosolutely amazing place to observe the beauty of our natural environment.

We will give our best, and every dollar donated will be dedicated to the important work of The Couchiching Conservancy protecting birds and nature, especially special places like the Carden Alvar.

Let’s Wing It is a team is made up of passionate, conservation-minded individuals, ready for a challenge! We surprised ourselves last year by finding 106 species and winning the recreational category, and we hope to find more this year!

If you aren’t able to participate, but want to help, please support one of the teams. Funds raised support conservation of the Carden Alvar, an Important Bird & Biodiversity Area. Over the past 25 years, The Couchiching Conservancy has been involved in the protection of over 8,000 acres of land in that region thanks to supporters.

Interested in learn more about the Alvar and planning your own visit to the area? Click here! 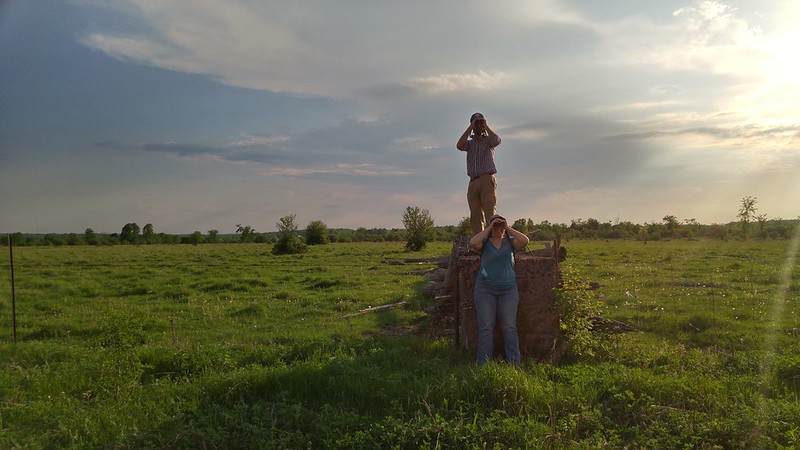