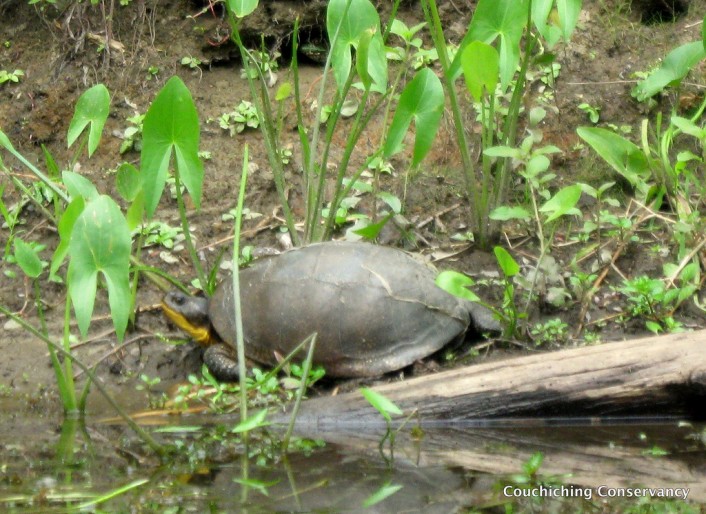 Why did the turtle cross the road? To get to the other side, of course! It’s a variation on an old joke. People often associate turtles with roads. Unfortunately, two pieces of information are missing in this story- the reason turtles go to the other side is to lay eggs, and sadly, they may not make it without getting run over.

You may be surprised that Ontario has eight species of turtles. Most people are only aware of painted and snapping turtles. The others are all rare now, and even snapping turtles were added to the list of species at risk in 2009 as their numbers are declining. Seven of our eight turtle species are listed as endangered or threatened, or maybe in a lesser category- “special concern”, like the snapping turtle. It is no exaggeration to suggest that Ontario’s turtles are in trouble.

One reason is the historic loss of habitat for our turtle species. Most turtles live in wetlands, like marshes, swamps, and bogs. South of the Canadian Shield, Ontario has lost ~70% of its wetlands, so there are a lot fewer places for turtles. In some regions, most species are now restricted to protected areas like parks, and nature reserves.  Along the southern edge of the Canadian Shield, an area now known as “The Land Between”, there are still many wetlands, and this area is warm enough, especially near Georgian Bay, for cold-blooded animals like turtles to survive. This region contains some of the best remaining habitat for our turtles.

Southern Ontario now features a dense network of roads. When turtles come out of the wetlands to lay their eggs, they often cross these roads. They move slowly and pull into their shell when scared. Many turtles are run over. The Blanding’s turtle, with its yellow chin and high-domed shell, may walk five kilometres to nest, so it is affected more than most.

You might think this is no big deal, since many other animals get run over and their numbers are still good. It’s different for turtles. Once turtles get big enough that their shell can protect them, they have virtually no predators. A few years later, around age twenty, females will start to lay eggs each spring. And, they don’t stop. That’s the big difference- they keep laying eggs even when they are a century old! It sounds like a lot of eggs, but almost all the eggs and hatchlings get eaten, so the population depends on these adult turtles living for many decades, just to lay enough eggs for replacement. And now, they don’t because their lives are cut short by our cars.

If we want to keep turtles around for the future, we need to fix this, and soon. In some places, there are still lots of turtles, but many are males since they don’t leave the water to nest. So, we need to start while there are still females around! We need to get serious about barriers and protected crossings (culverts!) for wildlife, especially turtles. Where roadless areas exist, we need to stop building roads. Protecting our remaining wetland habitats is vital- I’m proud of the work the Couchiching Conservancy has done in this regard.

If you see a turtle on the road, please stop and move it across in the same direction it was going. Don’t put it back in the water, it is not lost and it would have to walk back again! Sometimes, the turtle has already been hit, but it may not be too late. With proper care, injured turtles can survive and go back to the wild to lay eggs for the future.

This is why we need the Georgian Bay Turtle Hospital! You can help make it a reality.  Until Dec. 11th, vote online daily for us to receive $150,000 from the Aviva Community Fund. The direct link is http://www.avivacommunityfund.org/ideas/acf17527.  We are also in the Shell Fuelling Change competition (www.fuellingchange.com) for $50,000; if you buy gas at Shell (until Apr. 30th), get a receipt and redeem a code on it for votes.  The turtles are counting on you!

Interested in learning more about turtles? Join The Couchiching Conservancy for their Annual General Meeting on January 25, 2014 from 2:00pm – 4:00pm. The guest speaker, Dr. Ron Brooks of the University of Guelph, will be speaking on his research on turtles.
Jeff Hathaway is the founder of Scales Nature Park and a supporter of The Couchiching Conservancy, a non-profit, non-government land trust which helps protect thousands of acres of important natural lands for future generations. For more information on the conservancy, go to www.couchichingconserv.ca.