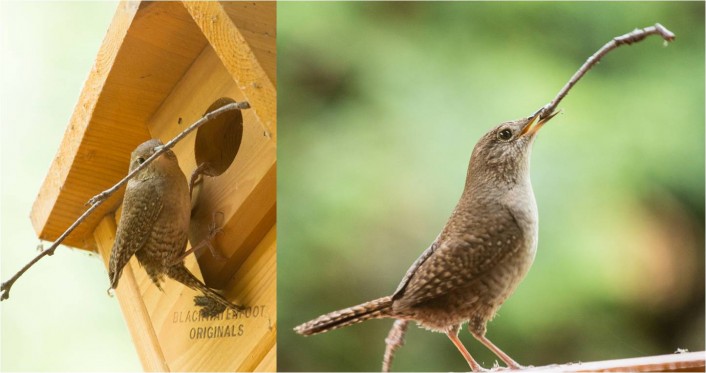 Some of the more popular television programs are those in which a Real Estate agent shows a couple a number of houses from which to select their future home.  There are a few such programs, each with their own particular twist, but in every case, the couple selects one house. We have a pair of birds in our yard whose antics remind me of those programs!  The birds are House Wrens.

Location being a prime factor in any real estate transaction, the male House Wren will search out a location he likes where there are a number of nest boxes or natural cavities. He will then begin to collect twigs and carry them to each of the nest boxes.  These twigs can be up to 9-10 inches long (20-25 cm), far larger than the diminutive Wren.  With a larger twig, he will usually land close to the nest box, and carefully align it so he can direct it into the box.  It is quite amazing to see him handle a long twig, with perhaps even a shoot coming off the main stem.  He will work at this for days on end, carrying in excess of perhaps a hundred twigs into conceivably up to 20 nest boxes or cavities.

Satisfied with his workmanship, he will take his potential mate around to each of these nest boxes or natural cavities he has filled with twigs, until she selects the one she wants.  If he hasn’t picked a good location or if he hasn’t done a good job of filling the potential nest, she may reject all of them and find another male who has done a better job.

When the female has made her choice, she will then begin to put the final touches on the nest, rearranging the “furniture” inside, to her liking!

This is where the analogy to the television programs ends, for in the Wren world, it becomes sinister from here on!

House Wrens tend to arrive in our area later than most other migrants.  By the time they get here, many other cavity or manmade nest boxes have been occupied by other species, such as Tree Swallows and Bluebirds.  This however does not phase the male wren in the least.  In his quest to establish a nest, he will simply take over any occupied nest, pecking holes in eggs and or killing the young birds by pecking them on the head.  Often he will toss the now dead young birds out the entrance hole, along with unwanted remnants of the previous nest or just pile twigs on top of the nest—pillaging and plundering it.  A scoundrel and murderer of the first order!

However, to many, House Wrens do have some redeeming qualities.

They are beautiful little birds. Gardeners in particular love them, as they feed on insect destroying plants.  And one cannot help but be amazed by their industrious behaviour.

Next time you hear that wonderful bubbling song of the House Wren, beware, there is a scoundrel in your midst!