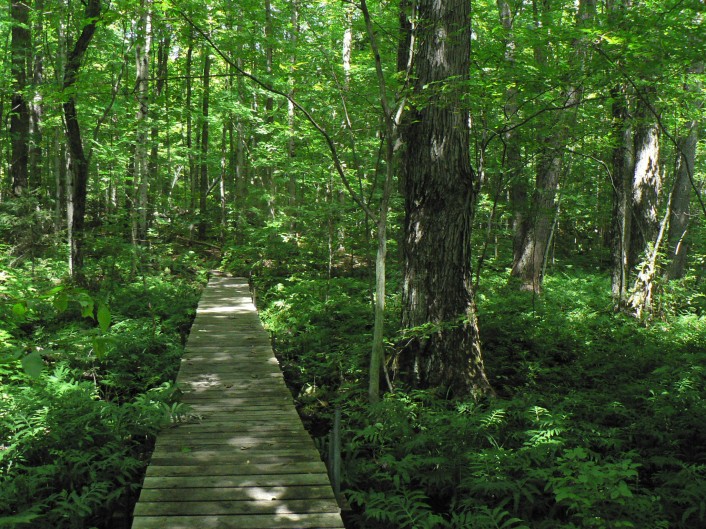 Several hundred years ago, lush, green forests covered almost all of southern Ontario.  The forests  were made up of trees of various species, sizes, and ages with shrubs and woodland flowers underneath.  Wildlife abounded in these wooded areas. There were few openings in the forest canopy except where weather systems had downed trees or where native grasslands thrived.

Today the landscape is very different.  Forests now cover only a small fraction of the province.  For example, in the extreme southwest portion of Ontario, there is only about three per cent forest cover.  Some wildlife populations are struggling to adjust to the loss of habitat, especially where the forests have been fragmented by development.

These small forests still sustain some wildlife but they often lack a high-quality habitat known as the forest interior.  Conservation of these “deep woods” is an important component of biodiversity protection.

What is forest interior?  This is the area deep within a woodland where the environment is sheltered from the influence of edges and open habitats.  Forest interior habitat is a remnant natural habitat similar to the one that existed before development.  Large woodlands that are round or square in shape have the greatest amount of interior forest.  The larger the wooded area, the greater the size of the interior.

This significant habitat is cruical for the continuation of certain wildlife species that simply cannot thrive in a fragmented forest landscape.

For example, many warbler species such as the Blackburnian warbler and black-throated blue warbler depend on forest interiors, as do thrushes, and pileated woodpeckers.  Presence of these birds is a good sign of the overall health of the woods.

Some forest interior birds such as the ovenbird, make their nests on the ground or in low bushes and the deep woods help protect them from predation by animals such as raccoons and feral cats that prefer to hunt along forest edges.

Also, nests that are built in a forest interior are less susceptible to brown-headed cowbirds, a bird that lays its eggs in other bird’s nests.  The parasitic eggs are often hatched and raised by the host bird who may abandon their own young.  Cowbirds search out active nests in open areas, such as fence rows or forest edges and will avoid mature forests.

Large continuous forests also allow for greater mobility for wildlife to move to breeding areas or find food.  Wind and sun can dry up forest edges so the cool, shaded conditions found in a forest interior shelter ephemeral pools.  Forest ponds provide habitat for amphibians to lay their eggs and for the tadpoles to survive to adulthood.  Aquatic insects that inhabit the pools provide a food source for birds and amphibians.  The water in the ponds is also beneficial for the forest birds.

Popular spring flowers such as trilliums and spring beauties can be found in abundance in the forest interior where they are protected from competition from invasive species that could crowd them out.

In our region, we are still very fortunate to have large expanses of mature forests where there is a rich, diverse plant and animal life.

Many of the properties protected by the Couchiching Conservancy are large forested tracts that contain healthy deep woods. For example the Alexander Hope Smith Nature Reserve in Washago, a 113 acre forested gem, has been left in its natural state for many years.  A short, winding trail weaves its way through the reserve provides visitors with a chance to see an example of a beautiful interior forest habitat.  Barred owls and pileated woodpeckers have frequently been seen on this property.