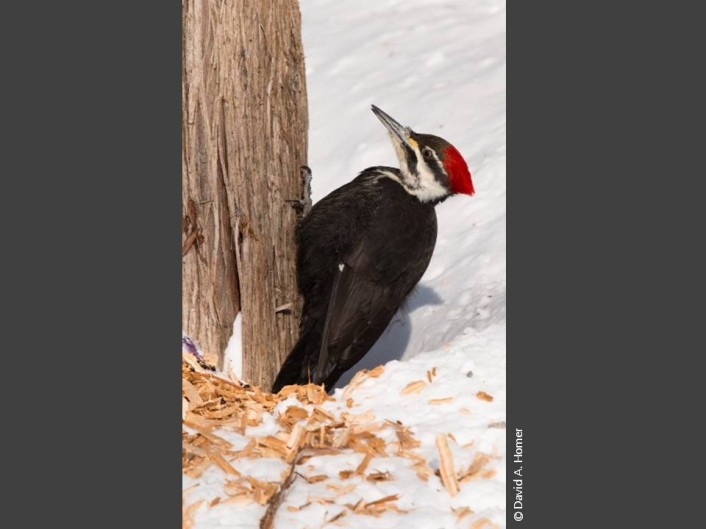 Before television played an important role in our lives, Saturday afternoons were rather special for us young children in our small town. We were offered free admission to the movie theatre in exchange for used products which were in short supply following World War 11. We collected tin foil from cigarette packages, and worn out women’s nylon stockings for recycling! Saturday afternoons at the show meant cartoons!

A generation of little children were introduced to the Pileated Woodpecker by the cartoon character Woody Woodpecker, created by Hollywood artist/producer Walter Lantz in the early 1940’s. Lantz created the character following an incident on his honeymoon–an acorn woodpecker kept dropping acorns on the roof of their cabin. He was ready to shoot the woodpecker, but his new bride convinced him otherwise and persuaded him to create a cartoon character instead. At the hands of Lantz’s animation artist, The Acorn Woodpecker, morphed into Woody, a Pileated Woodpecker!

The studio took considerable artistic licence in the characterization of their anthropomorphic woodpecker. When I saw my first Pileated Woodpecker years later, it was nowhere near as zany as Woody!

Pileated Woodpeckers, named for the large crest on the top of the head, are the largest of our woodpeckers. They are almost prehistoric much like pterodactyls in appearance, with their deep undulating flight pattern and their weird calls. However they are strikingly beautiful with dark blue/black, white and crimson feathers.

Pileated Woodpeckers are monogamous and carve out about 100 acres of old growth deciduous forest for their territory. Their main food consists of carpenter ants and various grubs which live in decaying and dead trees. They will listen to hear ants moving inside the tree and then excavate large, deep cavities using their head like a hammer and with their chisel- shaped bill chip out large chunks of wood with each hammer-like strike. I have seen foot long cavities which penetrate the diameter of the tree.   Some trees become so weakened by the size of the cavities, they fall over.

They use their long, barbed tongues to lap up the ants and grubs. In winter they will sometimes take suet from feeders.

Pileated woodpeckers usually mate for life. They lay 3-5 eggs in tree cavities in the early spring. Incubation, shared by both male and female takes about 15 days. Young will not fledge until they are about a month old.

Take advantage of these beautiful fall days and the walking trails on Conservancy protected properties to search out these large cavities and the birds themselves. Listen for them as they hammer and excavate cavities. While in the process of chipping out the wood, they are so intent on their mission, they can be easily approached!

By the way, Woody Woodpecker’s image can be found on the Hollywood Walk of Fame, along with two of his fellow characterized avian species, Donald Duck and Big Bird! Real Pileated Woodpeckers may not share their notoriety, but they have many fans in the Birding World!

Written be David A. Homer.