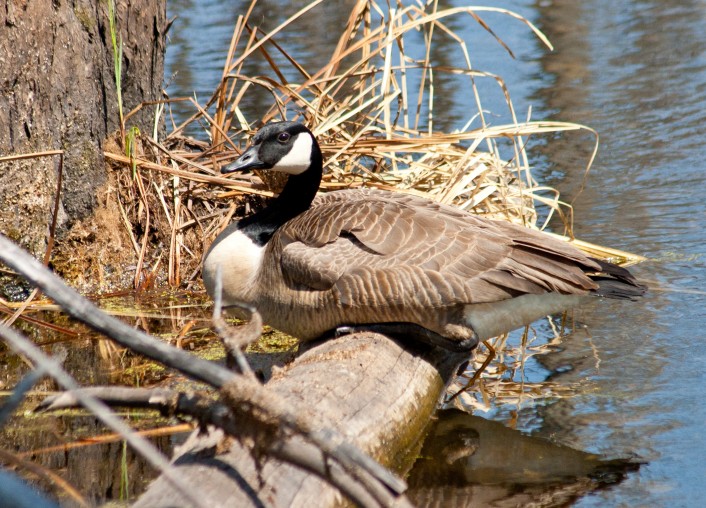 With my ten year old hands clutching my second edition copy of Peterson’s A Field Guide to The Birds and my Reader’s Digest book of Audubon Bird Prints, I hopped in the back seat of our 1942 Plymouth. My parents were taking me to see a bird I had never seen before, but I was already an admirer of the species from the paintings I had spent so many hours gazing at in both books.

How stately the Canada Goose was portrayed by the artists!

Canada Geese were not very common in the late 1940’s and 50’s, at least around our south western Ontario community. As a special “Thank you” from my Mom and Dad for cutting the grass and keeping the yard tidy during the spring and summer, we were off to the Jack Miner sanctuary just outside of Leamington, Ontario 50-60 miles away, a long trip in those days!

An avid hunter for many years, Jack Miner became one of Canada’s first conservationists when he converted much of his property into a sanctuary for migrating geese. The property already had a number of ponds on it, used in his brick making business. He attracted the geese with corn and decoys and soon thousands of geese would stop at this haven on their fall and spring migration.

It was a sight to behold as wave after wave of flocks would descend from the sky and on to the ponds and the surrounding fields. Thousands of birds, all honking at the same time it seemed! Jack Miner had died a few years before our visit, but one of his son’s, Jasper, was on hand to provide visitors with facts and stories for enquiring and in some cases, gullible young minds, and he also provided an autograph for one of my prized books.

I am reminded of that wonderful experience every time I see a flock of Canada Geese in their familiar “V” formation pattern, winging their way to distant parts, especially at this time of year.

We have a number of pairs who raise their young around our lake, some pairs with 20-25 young in their brood. The tender, fresh and chemical- free green grass on our lakefront property becomes a smorgasbord for goose families for a few weeks. And we all know, what goes in…comes out! Having spent so many hours cleaning up after they have had their fill, leaves me, I must admit, not so enamoured by their presence!

Canada Geese have fared very well across Canada and many parts of the World in spite of significant residential and commercial growth. They have adapted to human intervention unlike any other bird, to the extent that for many of us, they have become quite a nuisance.

I still have those two books and the intervening years have provided many interesting encounters with goose families. A nuisance they may indeed be for a time, but fall just wouldn’t be fall without them!