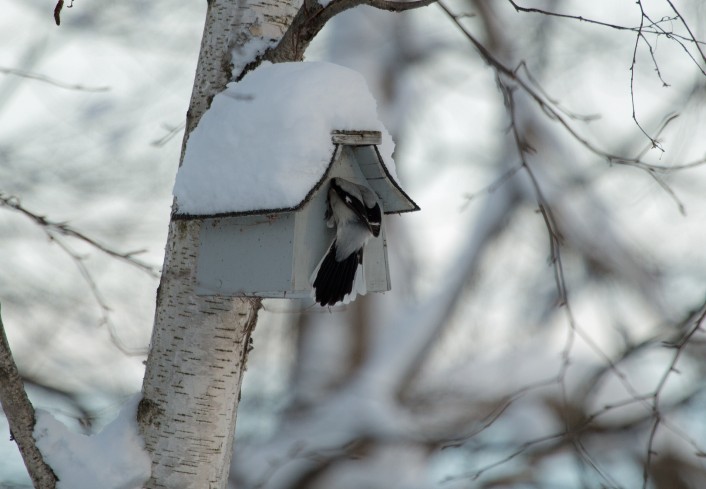 Come fall and winter when most of our song birds have gone south, we tend to forget the bird houses we have in our yards. But have another look!

While recovering from surgery a number of years ago, from my rocking chair in our front window, I watched a white breasted nuthatch enter the same house at precisely 4:25 pm each evening for over two weeks. It spent the night there sheltered from the snow and winter winds. That same bird vacated the house just after morning’s first light.

Other birds such as chickadees and bluebirds also use bird houses in winter. There have been many reports of entire families of 6-10 bluebirds, huddling together in a nest box during a cold fall or early winter night prior to their migration.

One day last winter while watching birds at my feeder, I noticed a northern shrike land in an oak tree in my neighbour’s yard. The birds at the feeder did not see him. Northern shrikes feed on small birds, mammals and insects. Soon the shrike was in pursuit of a white breasted nuthatch. Fortunately the nuthatch was a regular visitor to our yard and knew where to find security. The shrike chased and followed the nuthatch right to a bird house hanging in a nearby birch tree. The shrike tried in vain to get the frightened bird out of the nest box, but after 15 minutes he decided to look elsewhere for its meal!

I awaken every morning before dawn, and for the past week, in the dimness of the first light, I saw a bird vacating a swallow house which hangs in a tree just outside our bedroom window. It was impossible to identify it in the early light, but it didn’t seem to act like a nuthatch or chickadee. I had seen a brown creeper in the host tree during the last week or so and I wondered if possibly it could be one. Brown creepers tend to roost in cracks of trees or under the flap of a piece of bark, however they will nest in cavities, so maybe they would roost in a bird house, even though I had never seen one go in one. The next morning I jumped out of bed to get my binoculars, but the sudden movement scared the bird and it fled before I could get a good look. Intent on identifying it, the next night I took my binoculars to bed, knowing full well to keep them out of sight of my wife, so under the covers they went. Can you imagine my wife who retires much later than me trying to find her way into her side of the bed already occupied by a dog, a cat and me, and now…BINOCULARS? I can almost hear her thinking,”…should I call the Doctor now or wait ’til morning?” I awoke as normal, before dawn, and grabbed the binoculars. I lay there expectantly for some time. At first light, the cat awoke, and looking at me, only saw two great protuberances coming from my head….she leaped off the bed in a shot. Suddenly there was movement inside the box. It looked like tail feathers passing by the entrance, and then the bird appeared at the door, but still inside. I still was unable to identify it. Then the tail passed by again, and then the head came out of the box. In the bird’s bill were two fecal sacks. And then off it flew. Not a brown creeper as I had hoped, but a white breasted nuthatch! All of that movement inside prior to exiting the nest was the bird carrying out its early morning housekeeping and toiletry needs before heading out for breakfast!

The binoculars were put away before my wife arose; the event….a secret between the cat and me!

Keep an eye on those “empty” bird houses in your yard, they can be more than nest boxes!