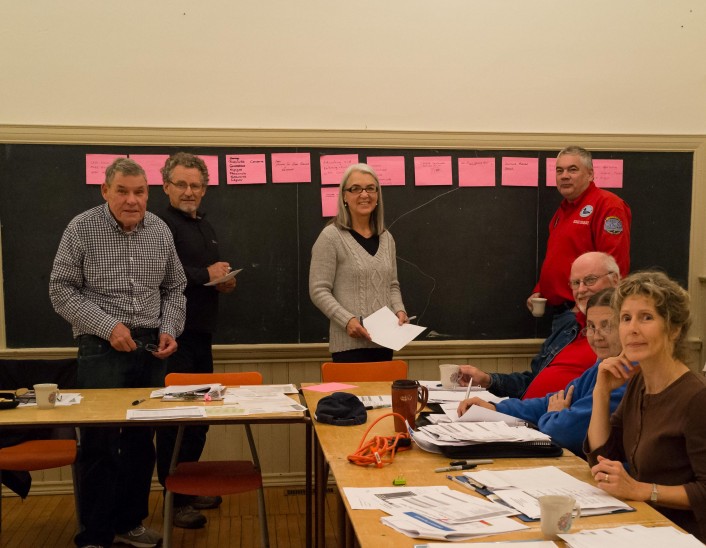 The Copeland Forest Stewardship Committee  has been working hard throughout the fall and winter to prepare an application for Non-Profit Incorporation.  Pictured here are some of the Committee members just after a name was chosen for the new organization.  We expect to submit the application to the Ontario government in February.  Stay tuned!  In this photo:  Dave Lord, Ted and Mary Anne Greatrix, Mike Van,  Ted Duncan, Carol McIsaac, and Ingrid VanderMarel. (Jan 21, 2015)

The grassland enhancement projects on Bluebird Ranch are continuing. Dave Hawke, Stewardship Program Manager, has been on-site for over 75 visits, assisted by a terrific team of volunteers. As clumps of cedar trees are removed the open grassland area is extended. This will provide much needed habitat for bobolinks, meadowlarks and other species that require large open grassy areas in which to nest. This project has been on-going since January 2014, and over 300 hours of volunteer time has been provided. Thank you!!

Paul, Alan and Karl volunteered their time to assist Dave with the grassland enhancement project on Bluebird Ranch. A well-earned and hearty lunch is enjoyed around the fire pit.Yes, there is 12″ of snow in the field! And it’s not even December yet! Minus 14 degrees in morning.

Luke and Paul appear to be doing a little “two-step” as they clean up the cedar trees on Bluebird Ranch. Once the woody debris has been removed from the area, additional grassland seeds will be sown to enhance the field habitat.

Dave Hawke, Stewardship Program Manager, and a merry band of volunteers are once again working on Bluebird Ranch to enhance the grassland habitat for bobolinks and meadowlarks. In this picture Bruce and Paul have a little bonfire going to clean up some of the woody debris.

Bruce Duncan and Kevin Binsted installed the bridge they had made into the Church Woods trail system. It looks fantastic! These guys also installed small footbridges at another muddy spot in the trail.

Last Friday eight volunteers came together for the first time to form the Carden Water Quality Team. Our partners in this project, Lakehead University Orillia, hosted a training session on collecting water samples. This is a new initiative for the Conservancy that will involve us testing out how effective our stewardship projects in Carden have been at improving water quality in the Talbot River sub-watershed. The level of skill in this group of volunteers is amazing: from Hydrogeologists to former Biology teachers, current Environmental Science students, and those with a passion to learn. Photo courtesy of Lakehead University.

Julia, Ginny, Tom and Garry ventured out on Wolf Run Alvar on Thursday morning for a Stewardship Walk. It was a rather wet and cold day, but they endured and hiked around the property for a few hours. Some highlights of the walk include hearing water flowing through the grykes and finding fossils.

You can read more Notes From the Field from our Spring and Summer edition.