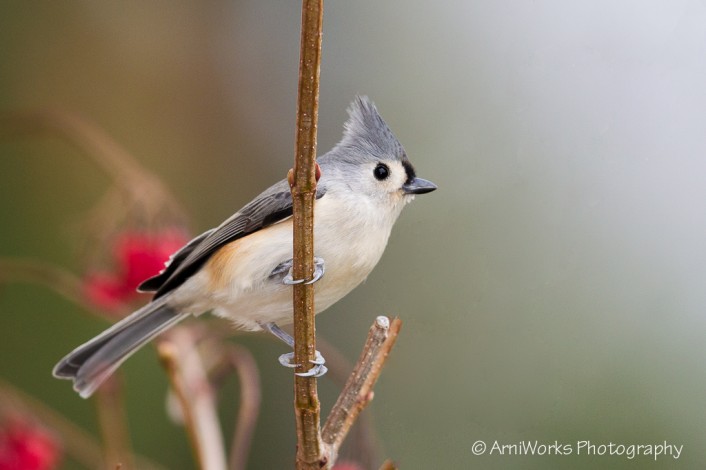 President’s of the Board, David A. Homer, continues his story of bird watching with this article. Click here to read the first part.

Previously I mentioned how disappointed I was missing a Red-headed woodpecker at my friend’s house. I returned home, rather dejected, only to have my spirits lifted by an e-mail from my good friend and wildlife photographer Arni Stinnissen. He had just heard from a mutual friend that they had a rare bird in their yard, and would he like to get a picture of it. I was invited to accompany him.

Now I don’t normally plan anything for Sunday mornings, as that is our worship service time, however, I figured that an early morning start and some good fortune, I would be home in time to accommodate both events!

The bird was located on the eastern shore of Lake Simcoe, just south of Brechin. At our agreed meeting place, he drove up beside me, and pulling out his iphone, he opened a bird song app and began to play the call of the bird we were hoping to locate. He said that this is the song we would be listening for. It was a varied song I had never heard before, a high whistle like peter peter peter peter!

“Have you ever seen a Tufted Titmouse?” he whispered! “Never”, I responded,”but I think this will be the day I do!”

Although I had never seen one, I certainly knew a lot about their behaviour and what they looked like. Tufted Titmice are members of the Paridae family of birds and are close relatives of Chickadees. They look and act much like them, although they are a little larger, don’t have a black cap, but they do have a gray crest on their head. They have gray under parts and rusty coloured flanks. I knew I would recognize one when I saw it!

The Blue jays and Chickadees were already feeding by the time we had set up. Purple finches came by, as did some Goldfinches and Nuthatches. It was getting really cold. The wind off Lake Simcoe was out of the south west and it was bitter. Arni fired off a few shots to check his exposure with Chickadees as subjects. At this time yesterday morning, I was being skunked by the Red-headed Woodpecker. Surely this wouldn’t be Déjà vu?

“There he is!”, Arni called. Out of nowhere the Titmouse appeared.  With lightning speed, he (it could have been a female as the sexes are alike) took a sunflower seed from the feeder and in a flash was behind a low shrub. I had never seen anything move so quickly. And then he flew up from behind the bush and off to the cedar trees on the perimeter of the property.

Another twenty minutes passed before he returned. This time we were more than ready for him and both of us got a number of shots of this agile little bird. This behaviour repeated itself four or five times over the next hour or so. He would fly very quickly from behind the house or a tree, grab a seed, take to the ground behind some cover and then leave the area for another twenty minutes.

We had our shots. Over a great cup of hot coffee we discussed the event with our gracious hosts. Researchers have determined that Tufted Titmice spend their entire life in the general vicinity of their birthplace. In Ontario, Tufted Titmice are normally only found in the Niagara area, and sporadically on the shores of Lake Erie as far as Windsor. This bird was a long way from home and more than likely got caught up in a very strong wind which blew it north and over Lake Simcoe, but we can’t be sure!

How quickly a birder can go from absolute dejection to euphoria. That was the story of my weekend!