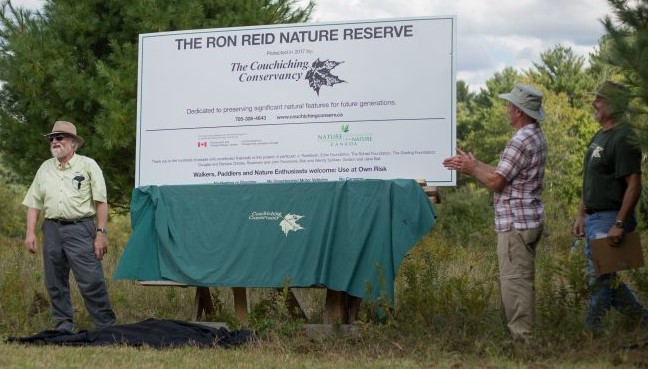 You can tell a lot about a person by the lines on their face.

Over time, habits of thought tend to form a permanent record on your skin, around your eyes and mouth, on your brow. Ron Reid has a lot of smile crinkles.

Your actions form a kind of permanent record too, for better or for worse. Ron Reid’s record lies on the local landscape, particularly where there are large swaths of green.

The Washago resident is being recognized in September for a lifetime of achievement in Ontario conservation when The Couchiching Conservancy officially dedicates a 730-acre nature reserve on the Black River, east of Washago.

During our campaign to protect this beautiful tract with more than four kilometres of the river flowing through it, we referred to the land as the Black River Wildlands. But fairly early on, a few of us began to plan for a name change. When we unveil the sign at the property on Sept. 16, it will become The Ron Reid Nature Reserve.

The rest of the campaign team kept the honour secret, and when Ron was finally told following the completion of the acquisition, he responded in typical fashion. He was first shocked, then a little overwhelmed. Finally, as the weight of the honour settled in, he sought to acknowledge all his partners who had worked together over so many years to make so many things happen. He suggested the name of the reserve be changed to Ron Reid and Friends Nature Reserve. His friends of course declined. It was classic Ron Reid.

One of those friends who deserves special mention is also a Washago resident: Ron’s wife Janet Grand. Janet has a remarkable record of accomplishments in her own right as a Couchiching Conservancy founder and past president. She and Ron were a coalescing force behind the creation of the Conservancy, and she is a highly respected voice in the conservation community. Paying tribute to Ron without paying tribute to Janet would give you only a partial picture.

It’s not my intention to put Ron up on a pedestal. He would be very uncomfortable there; the first to acknowledge his own flaws and quirks — and to laugh at them. But the honour bestowed on him is an opportunity to recognize the fact that he has made our region a better place in which to live. With his friends, he helped found the Conservancy, lead it as both president and then executive director, and in the process protect thousands of acres of wild space permanently — a gift to the future.

I have been deeply fortunate to have Ron as a friend and colleague for many years now. Long before I worked for the Conservancy, I was influence by him. As a young editorial writer for The Packet & Times, I took note of the way he navigated through community controversies involving the environment. He is a third-way thinker, a person who seeks to find solutions that work, not just for one side or another, but for all sides involved. He has a unique talent for moving things forward and bringing everyone along with him.

His influence tempered my sometimes-hot opinions and I think, heightened my focus on nuance. People who consistently offer reasonable approaches to complex issues tend to have a positive effect on others around them. We could use many more like him these days.

I know I am just one of many who are better for having known Ron.

I welcome you to join us on Sept. 16 at 1 p.m. at the Ron Reid Nature Reserve to celebrate a remarkable man. The official ceremony will take place at 1:30 p.m. and guided hikes of the reserve will follow. Please contact the Conservancy office if you plan to attend so we can provide directions to the site.

And if you see Ron and Janet on the street, give them a big thumbs-up.

Mark Bisset is the executive director of The Couchiching Conservancy, a non-profit, charitable land trust which protects thousands of acres of wilderness in the Lake Couchiching region. For more information on the Conservancy, call 705-326-1620 or go to www.couchichingconserv.ca.