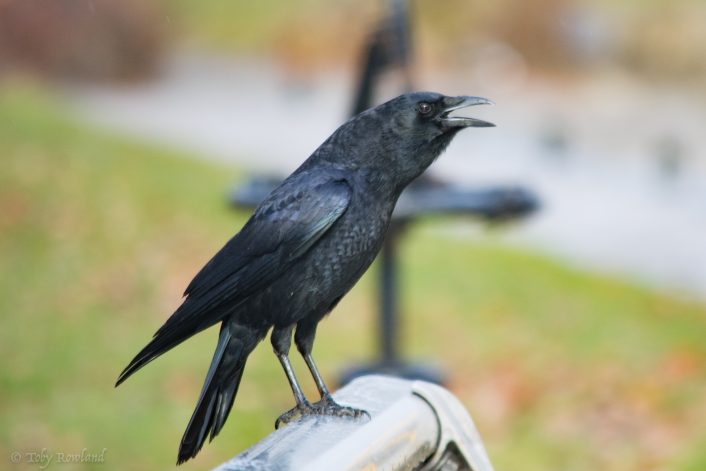 The caw of the crow, the flight of a bat, and the shadow of a spider all become a bit more spooky this time of year. Read some interesting facts about four spooky species here.

During the month of October, some species are seen a little differently. The caw of the crow, the flight of a bat, and the shadow of a spider all become a bit more spooky this time of year. Here are some interesting facts about four spooky species that you may not have known about.

In legends and myths, crows and ravens are the harbingers of doom and companions to witches and others who practice black magic. But take a look at how incredibly intelligent they can be.

1.  The snooze button. While hibernating, bats do not feed or drink, and their body temperature and metabolic rates decrease markedly. This energy-efficient state allows them to sleep away the long northern winters.

2. Hanging out. Most bats love to hang (literally) in abandoned mines when trying to beat the summer heat or when seeking a spot to hide during winter. These hibernacula, or hibernation roosts, are essential for bat populations and are often destroyed or disturbed by humans and other species.

3. Fantastic Mr. Bat. There are more than 1,000 species of bats in the world. The largest species is the Pteropus bat, also known as flying foxes or fruit bats.

4.  Dead ringer. White-nose Syndrome is an alarming and mysterious disease affecting bat populations throughout North America, including Canada. In New Brunswick, it’s estimated about 99 percent of little brown bats have died. In Nova Scotia, the syndrome has spread to Cape Breton.

There is currently no cure or containment for the syndrome. Without one, it is expected that the entire Canadian population of bats will be affected within 12 to 18 years, according to Canadian Wildlife Health Co-operative.

5. Of bats and men. Many people believe bats are rodents, but in fact bats are more closely related to primates and humans than rats or mice. They are very clean animals. Very few contract rabies and even then, the risk of contracting rabies from a bat is extremely low.

*The below information was taken from Ontario Park’s 8 Fun Facts about Spiders by Pilar Manorome.

1. Eight is the magic number in the spider world

As a member of the arachnid family, these loveable beings are characterised by eight legs.

This sets them apart from other members of the arthropod phylum. They also have the typical count of eight eyes.

2. All spiders can produce silk, but not all spiders make webs

In fact, spider silk can be used for a variety of things, from the classic web-creation to bundling their eggs to carry around with them, or even ballooning (the dispersal of spiderlings on wind currents).

Take our beautiful bold jumping spider here, for example. The jumping spider hunts by jumping on its prey, but it often uses a silk dragline as a safety harness in case it misses its mark.

3. Our spider friends understood the concept of “waste not, want not” long before we did – and on a much grander scale

Before building a new web, orb-weavers and some other web-building spiders, eat their old webs to recover those proteins. Through the use of radioactive tagging of web material, it has been discovered that 80-90% of the previous web material shows up in the new web.

4. All spiders are predators – but hunting techniques differ between spider families

For example: goldenrod crab spiders use camouflage to blend into the flowers they sit on, waiting for the arrival of unsuspecting prey. They have the ability to change their colouration from yellow to white, depending on the colour of the flower they choose for the day.

Instead, they use a special digestive enzyme to turn the insides of their prey into a liquid lunch – often leaving behind the seemingly intact, yet empty, prey. You’ll never look at juice boxes the same way again.

6. You can check a spider’s gender by looking at its face

No matter what species I am talking about, everyone always wants to know how to tell the boys and girls apart. And here’s the trick for spiders: check out its pedipalps (the two small appendages in the front of its face).

7. Males risk being eaten during courtship

Since females tend to be larger than the males — and also quite voracious predators – male spiders run the risk of being eaten during their courtship.

The male must be careful in the approach by gently plucking the outer edges of the web, indicating his presence, then slowly making his way to the centre of the web where the female waits. One wrong move, and he’s dinner. And he’s only got about twenty seconds to impress her. Talk about a high pressure environment!

8. Harvestmen, or daddy longlegs, are a member of the Arachnid class, but are not considered spiders

While they do have the eight legs, which classifies them as an Arachnid, they only have one body part and two eyes. They also do not possess venom or a delivery system to inject venom. That should nip that myth in the bud.

*The information below is taken from Ontario Park’s The Superpowers of Owls by Alistair MacKenzie.

Owls only come out at night, right?

In fact, the Snowy Owl, Great Gray Owl, Northern Hawk Owl and Short-eared Owl are often active during daylight. These four species breed in the far northern reaches of Ontario and beyond into the arctic, where summer daylight is extended and where a purely nocturnal hunting strategy could lead to empty stomachs!Owls are specially adapted for life in the dark, but let me get something out of the way first: not all of the owls in the list above are active only at night.

In some years, these species can migrate southward well into southern Ontario and can yield great daytime observations.

One of the main things that distinguish owls as a group from other birds is a highly developed sense of sight. Owls have excellent eyesight and can see well in low light conditions.

In addition, owls have eyeballs that are so large that they are fixed in their eye sockets. Fixed eyeballs prevent an owl from being able to look around while holding their head still like a human can.

To compensate for fixed eyeballs, owls have twice as many vertebrae in their necks as humans do; extra vertebrae allow the neck of an owl to rotate or twist more and allow owls to swivel their heads about 270 degrees when perched.

In addition to excellent eyesight, hearing is highly developed in owls. While there is variability among species, owls have evolved to direct sound into their ears in a very sophisticated way that enables them to accurately determine where a sound is coming from.

Of course, like other animals, they have an ear on each side of their head, so if you imagine a mouse scurrying around on the forest floor, they can easily determine if the prey is to their right or left as the sound will reach one ear a fraction of a second before it reaches the other.
The facial discs of feathers that are so characteristic of owls are believed to be sound directing adaptations that funnel sound past their eye and into the ear openings located on the side of the head.Similarly, some species of owls have a flap of skin in front of their ear openings that somewhat shields sound. A louder sound likely originates immediately behind the owl, a muffled one in front.

In addition, amazingly, some owls have one ear positioned higher on the side of the head than the other one! As a result, a sound from beneath the owl hits the lower ear first, and then a fraction of a second later enters the higher ear.

To take advantage of these hearing adaptations, owls add another specialization to their arsenal…near silent flight.

A few simple modifications to the time-tested design of the feather enable owls to fly without making a sound! The leading edges of the primary feathers of owls have a comb-like fringe. This simple difference from diurnal raptors lessens the rippling of the edge of the feather and yields silent flight.

These species aren’t the only thing we should be spooked out by this year. According to the 2018 Environmental Protection Report in order for wildlife populations and ecosystems to thrive in Southern Ontario we would need 50% forest cover. Currently, Southern Ontario only has 25% forest cover, which poses high risks to important species and their habitats. Talk about scary!

The Couchiching Conservancy’s Black River Wildlands Corridor Campaign aims at developing a corridor of connected wilderness to support hundreds of migratory and non-migratory species in the region. Instead of indulging in this years Halloween treats you could help protect these spooky species and their habitat. Donate to the campaign here!