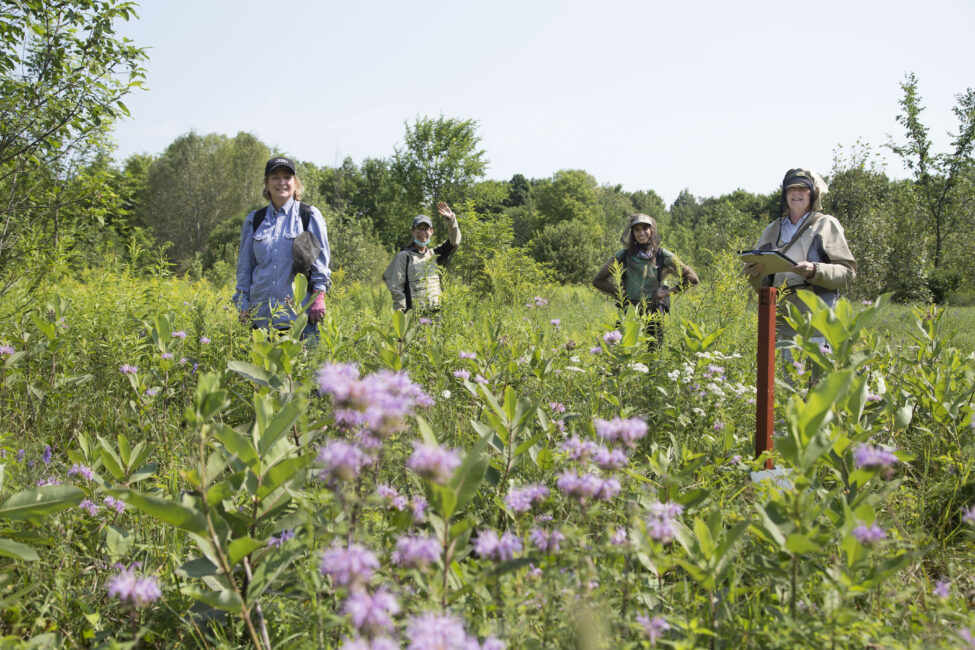 Featured above are Susan Crowe and Mary Ellen Mulligan making their first visit to Ron Reid Nature Reserve to test sampling protocols. They also hiked into the meadow at Sweetwater Nature Reserve to practice identifying Monarch eggs and caterpillars.

The meadows were alive with insects and starting to look especially beautiful with the Wild Bergamot in bloom, and Goldenrod just starting to turn yellow.

When the bugs are biting, and you’re thinking twice about going out in the forest, you have to remember that there are always interesting things to find that will (hopefully) make you forget about the pesky insects for a while!

Take the case of Nancy Chong, Ruth Henderson, and Toby Rowland, who were on the hunt for Salamanders and their eggs.   They were soon finding Spotted Salamander egg masses, Green Frogs, and the odd Eastern Newt darting away.

One newt was acting strangely, and after crouching down in the water to get a video they realized it was a male Eastern Newt displaying to a female.  Not something you see every day.

In the video below, you can see the male undulating his tail fin in order to attract a female. You can tell the male from the female by his much bigger back legs with hard black pads. These form so he can hold onto the female.  at one point he deposits a spermatophore, which she didn’t seem too interested in. After a while the female seemed to realize that she could find a better display elsewhere and moves on.    The whole experience was well worth the annoyance of a few mosquito bites.

At 4,400 acres, more than one team is needed to monitor the rich Vernal Pools of Copeland Forest.  After three years monitoring on his own, David Cowl teamed up with Stu Blackwell this summer.

They spent hours exploring the forest, and turned in reports of wood frogs and spring peepers, numerous species of salamanders, newts, and even a sighting of a White-tailed deer.

The Agnew-Melnyk Easement agreement was signed with The Couchiching Conservancy in 2004.  Sandy Agnew is a well-known environmentalist in Simcoe County, and he and his partner Lynne Melnyk play a very active role in Stewarding their 39.5 acre property in Oro-Medonte.

Lynne and Sandy participate in our frog call monitoring program in their own backyard, and have also welcomed other Conservancy volunteers to play a role in stewarding this conservation easement.    For two years now, David Cowl and Ian Bender have teamed up with Sandy and Lynne to monitor the property and tackle invasive species such as Phragmites.

This property is also the inspiration for our new Grassland Bird Monitoring Program, which began in 2021.  A  partnership with Forests Ontario, The Couchiching Conservancy, Sandy, and Lynne restored a field on the property to habitat suitable for grassland birds such as Bobolink, Meadowlark, Whip-poor-will, and Common nighthawk.   You can see the wonderful results in the top left photo.     All that was left to do was monitor this summer for grassland birds.

When Land Stewardship teams are this dedicated, it provides a great deal of stability for our organization. Here are just a few of the benefits such steady eyes and ears provide to conservation efforts:

Click here to read Spring 2021 Notes from the Field