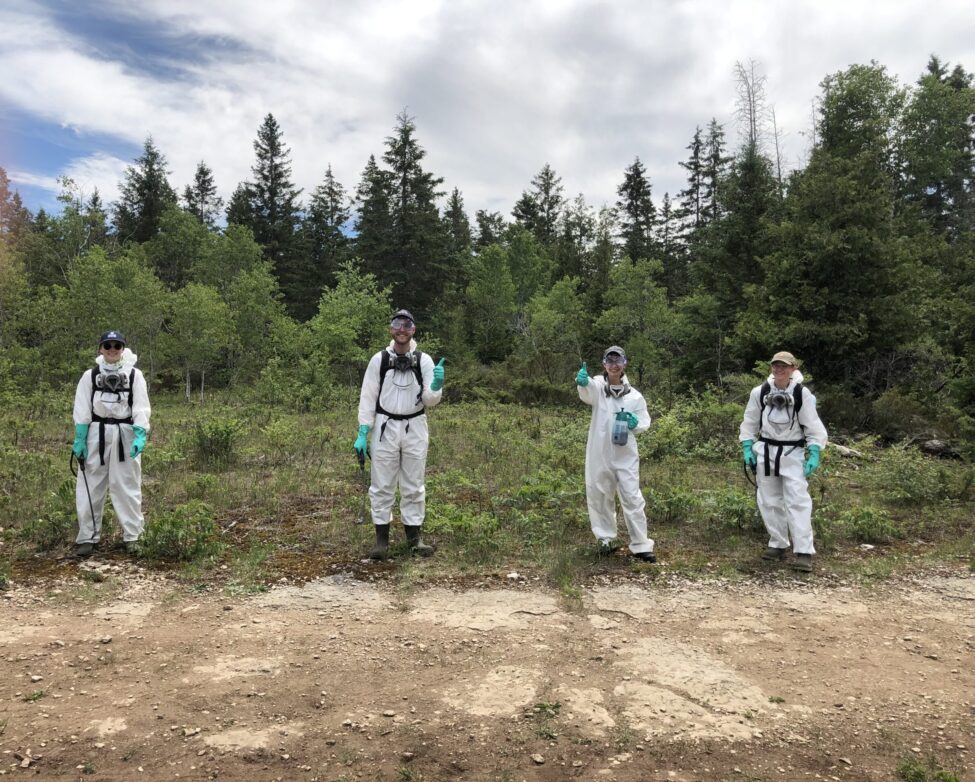 Left: Ryan and Claire giving a thumbs up with NCC staff. Right: Ali from NCC getting ready to spray.

Annual chemical control of Dog Strangling Vine in Carden is necessary to protect this globally-unique alvar. The spraying program has been successful and each year less and less chemical application is necessary. Great care is taken to spot spray and only the minimal amount of chemical is needed to kill the DSV plants and avoid surrounding vegetation. Ryan Lamoureux and Claire Buchanan headed out to Carden on a hot a sweaty day in June and was joined by staff members from Nature Conservancy of Canada. Ryan and Claire had just finished their pesticide training course and they both thought it was great to be able to apply the safety knowledge they learned in a real-life situation to protect this rare habitat. They saw a fantastic view of a Loggerhead Shrike, Upland Sandpiper and a pair of Sandhill Cranes.

It is bat monitoring season! Teams are starting to head out to their designated sites throughout June to monitor for bats. Jeff and Kristi Cole did their first visit at Grant Wetland and Wilson Point Wetland in early June. Just after sunset, the sky turned bright pink and purple and there were fireflies everywhere! Some of the bat species that were detected were Hoary Bats, Silvered Hair Bats, and Big Brown Bats. While searching around Wilson Point Wetland, Jeff and Kristi put their frog monitoring skills to the test as they identified the different species calling. They came across a frog that they thought was a Mink Frog, but turned out to be a Green Frog in disguise!

Earlier in the spring, Ann and Neil Gray heard frogs calling throughout Turnbull Ranch. The vernal pools in the poorly drained sections of alvar grassland and cattle ranchland provide good habitat for certain frog species.  Aiesha Aggarwal headed out on a monitoring visit with Neil and Ann on May 28th. Most of these sites were dry. They set up 3 frog monitoring stations to keep an eye on. The alvar plants, including Prairie Smoke and scarlet paintbrush, were in bloom.

The CCC summer interns, Claire Buchanan, Ryan Lamoureux, and staff member Aiesha worked on trail maintenance at Sedge Wren Marsh one day in mid May. The songs of an Eastern Towhee, American Bittern, and Golden-winged Warbler provided the soundtrack for the evening.

After sunset, we monitored for frogs. We heard Spring Peepers, a Leopard Frog, and a Green Frog. During the count, Wilson’s snipes winnowed overhead, and a pack of coyotes and a Barred Owl called from the forest across the marsh.

Bug jackets (check!), bug spray (check!), masks (check!), rain jackets (check!). With the unpredictable spring weather, pandemic, and bug season (yay!) field staff and volunteers are wearing a lot of layers these days. At the beginning of May, Claire Buchanan, Ryan Lamoureux, Joelle, Toby and Aiesha went to Taylor Nature Reserve to check the salamander boards and vernal pools. They found 1 Eastern Red-backed Salamander under a board and a few Spotted Salamander and Blue-Spotted Salamander Egg masses in the vernal pools.

Checking salamander boards for the first time in the spring is so exciting! You never know what kind of species you will find or how many. Toby gave Sarah Graham a tour of her site at Adams Nature Reserve for the first time. Unfortunately, her monitoring partner Courtney was unable to make it as her car broke down on the way! They walked the vernal pools and checked the salamander boards. They found 6 Eastern Red-backed Salamanders, roughly 60 Spotted Salamander egg masses, 40 Wood Frog Egg Masses, and Four-Toed salamander eggs.

With the large amount of rain we got in April, we used this as an opportunity to observe the movement of local amphibian populations across roadways and whether they were being impacted by neighbourhood traffic. Toby, Jane, Tricia, Larry, and Joelle did a night visit on April 11th to Grant Wetland and Wilson Point Wetland to examine what species were on the move.

In the spring, amphibians are seeking out wetlands to lay their eggs and take advantage of rainy nights to travel. The volunteers helped a number frog species cross the road including Wood Frogs, American Toads, Leopard Frogs, and Spring Peepers. They also helped two Blue Spotted Salamanders.

Unfortunately, there was a large number of amphibians that didn’t make it and had been hit by cars before the volunteers could help them. A reminder to keep an eye out for wildlife when driving!

A little bit of wind doesn’t stop volunteers from getting out to monitor! One day at the beginning of April, Mary and Omer Mick headed out to Sweetwater Nature Reserve to monitor for frogs. It got quite windy, and no frogs were heard. Mary and Omer have been dedicated volunteers since the very beginning. If you look closely, you can see that Omer is wearing one of the original Conservancy volunteer hats!

There is so much life in a vernal pool. In early April, the ice had finally melted off vernal pools, making them the perfect breeding spots for amphibians. Sue Deadman and Aiesha completed the first daytime frog monitoring survey at Deadman Easement. They visually scanned the pond, trying to spot the calling Spring Peepers, Leopard Frogs, Wood Frogs, and Chorus frogs. They saw 1 Leopard Frog. Sue pointed out a small inlet feeding into the frog pond where she had seen caddisfly larvae in previous years. They took a closer look and found caddisfly larvae lumbering across the submerged sticks. They all had similar casings, made of pieces of woody debris and other organic matter “glued” together by the silk they create.

On April 7th, Kaila Cramer and Kaye Zoller did frog monitoring at Ling Easement. The Spring Peepers were calling so loudly that it was difficult to hear much else, other than the winnowing of a Wilson’s Snipe and the yips from a pack of Coyotes.

Connecting with nature has always been important to our well-being, and it has been especially important during the pandemic.  To ensure we can continue to keep nature reserves open and safe, volunteers have taken on increasing amounts of responsibility this year.   They’ve been  pick up garbage and other fecal substances, report quad and snowmobile activity to staff, and keeping an eye on usage numbers.

It’s been a challenge, but one that we are trying to embrace.  Every time someone visits a nature reserve for the first time, we try to ensure they feel welcome and consider joining us.

Kathy Hunt and her grandchildren spent some time welcoming visitors to Grant’s Woods on a warm Saturday this April.   The grandchildren enjoyed being trail monitors and helped take notes.

Reports of Chorus Frogs calling in Carden and Painted Turtles moving about in Barrie have us scrambling to start the earliest field season in recent memory.

On March 30th, Aiesha and Dorthea met Cynthia Ferris and Pam Reekie at Whitney Wetland to orient them to their new frog call monitoring site.   As 5 pm temperatures hovered around 15 degrees,  we heard a few Western Chorus Frogs, while a Belted Kingfisher patrolled the wetland, making its familiar rattling sound.  A muskrat sat under the bridge.

After dark we heard spring peepers, and a Wilson’s Snipe winnowed from the field next to the wetland.

The Whitney Wetland was acquired in 2020, thanks to a generous donation from Norm and Irene Whitney.  It creates a direct connection to McIsaac Wetland, and is part of the Mud Lake provincially significant wetland.   Both Nature Reserves are challenging to access and do not have  public trails.

While it was early in the season for salamanders to be moving about, who knew what would be found in such unseasonably warm weather?  Nancy Chong and Ruth Henderson have become valued members of the Copeland Forest citizen science effort, monitoring for Plants, Salamanders & Vernal Pools, and Nancy does water monitoring too.

Are you planning to attend the Copeland Forest Friends Annual General Meeting?  All the details here.

Too many buildings can become a liability for a Land Trust, taking us away from our focus of protecting habitat.   So despite the attractive qualities of this little shed at Taylor, we decided it needed to go.

Over the winter, Alan Smale, John Walinck and  Karl Schulz carefully dis-assembled the shed, recycled what they could and enjoyed a nice bonfire from the remains.

Many of you reported the activity, fearing it was vandalism and we appreciate it.  It is good to know how many people there are looking out for the special natural places in our region.  A moose even came by on the first day of spring to see what was left.

Sorry Joelle, your dream tiny home will have to wait.

Read the Winter 2021 Notes from the Field here…